It was snowing this morning.  Not a lot, just enough to coat the cars and get a little bit on the roads; an inch to an inch and a half at the most.  That's pretty common in Wisconsin, nothing people around here haven't seen before, which is why it was so bizarre to see a car spun out on my way into work and then to hear stories from other people about accidents they saw on the highway.  It's an inch and a half of snow, maybe 2 at the most.  How the fuck do you crash your car in that??  We're not talking "The Day After Tomorrow" here, folks.

I've been driving in the snow since I first learned how to drive, and I've had to do it in good snow vehicles and bad snow vehicles.  There's really not much to it.  You go a little slower than you normally would, you watch the road to spot problem areas, you keep your windshield wipers going, and you don't slam on the brakes.  Anybody who can't do that and ends up crashing his or her car in less than 3 inches of snow should have their licenses taken away.  Now onto the links!

- On Tuesday, Abe Froman-Sausage King of NoMaas looked back at the track record of low-dollar/advanced-age Yankee signings as they seem primed to add a few more of those guys soon.

- Chris Mitchell of Pinstripe Pundits hasn't given up on Ivan Nova, and provided some statistical support to explain why nobody should be giving up on Nova.

- On Wednesday, Mike Axisa of RAB identified possible trade deadline targets to address the Yankees' needs since they don't appear to be interested in addressing them prior to Spring Training.

- Mike Eder of TYA started searching for trade options to upgrade at catcher, since picking up George Kottaras and his non-guaranteed deal apparently wasn't a good option.

- Steve Skinner of Bleeding Yankee Blue ranked the AL East shortstops heading into 2013.  I'd be hesitant to put Jeter at the top until I see how he looks coming off surgery, but at his best he's still probably the pick of the litter.

- Jimmytoucan of Yankees Fans Unite commented on the early roster projections for the Trenton Thunder.

- On Thursday, Chad Jennings of LoHud examined the best and worst case scenarios for Robinson Cano and the Yankees in relation to his upcoming free agency.

- Brien Jackson of IIATMS continued to bang the logic drum in response to the reactions around the blogosphere to the latest luxury tax news.

- El duque of It Is High... reacted to the ridiculous "Youkilis not returning Joba's calls" non-story as only he can.

- Steven Goldman of Pinstriped Bible mused on the transition towards building a bigger, better bullpen at the expense of the bench and how the Yankees will be affected by that this season.

- On Friday, Fernando Alejandro of Respect Jeter's Gangster looked ahead to the number of guys who are free agents in 2014 as a way to put the underwhelming 2013 offseason in context.

- Bryan Hoch of Bombers Beat had some good quotes from Brian Cashman on the current state of the Yankees and the upcoming season.

This week's Friday Jam is "Jambi" by Tool.  Tool is probably the most popular band to not put out new music regularly.  There are huge gaps between albums and it always seems like they grow in popularity from one to the next.  There have been rumors of a new album out for a while now, but rumors of a new Tool album are like rumors connecting the Yankees to big names during the offseason.  Until it actually happens, you can't put too much faith in them. 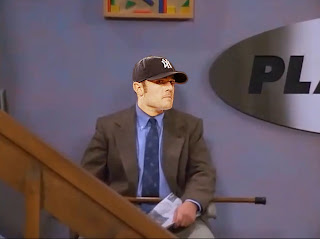