Short day for me today.  Playing in my buddy's charity golf tournament again, although I'm not exactly sure playing golf with a burned-to-shit hand in 90+ degree weather and humidity and dodging thunderstorms is going to be much more fun than slacking off at the office.  It'll probably turn into "drunkenly driving the cart around while my buddy hits in the pouring rain" at his charity golf tournament again pretty quickly.  Now onto the links!

- On Tuesday, Chad Jennings of LoHud had a really cool collection of quotes about Mo from a bunch of his fellow ASG relief pitchers.  There really might not be a more universally-respected person in all of pro sports than Mo.

- El duque of It Is High... checked out a recent SS Staten Island Yankee game and offered up his thoughts on the prospects he saw, including 2013 1st rounder Eric Jagielo.

- Mike Ashmore of Thunder Thoughts interviewed former top Yankee prospect Mark Melancon about his rise to Major League All Stardom after struggling early in his career.

- Abe Froman of NoMaas compared this season's ASB run differential to past years to see if there's a precedent for success based on the team's current -2 differential.

- Daniel Burch of The Greedy Pinstripes proposed an interesting trade scenario involving a couple names not being discussed much.

- On Thursday, Mike Axisa of RAB weighed the "buy or sell" option for the Yankees as they approach the trade deadline.  The poll results might surprise you.

- Jason Cohen of Pinstriped Bible had an interview with fringe pitching prospect Brett Gerritse.  Love me some prospect interviews.

- William Juliano of The Captain's Blog investigated the idea of starting pitchers, specifically CC Sabathia, "pitching to score."  Most CC haters would probably agree with this analysis.

- William Tasker of IIATMS/TYA looked back at former Yankee pitcher Ed Figueroa and his glory days of the 70s.

- On Friday, Chris Mitchell of Pinstripe Pundits wondered how much A-Rod has left in the tank now that his return is mere days away.

- Matthew B of Yankees Fans Unite had 5 big questions about the Yankees heading into the second half.

Going with a little Local H for this week's jam.  Awesome band.  Saw them in a crummy little bar tucked into a strip mall a few years back in Naperville with a buddy of mine.  They packed about 400-500 people into a place that probably should have only held about half of that and Local H played for about 2 hours.  $10 ticket for that show and 6-buck buckets of Old Style.  That'll get it done. 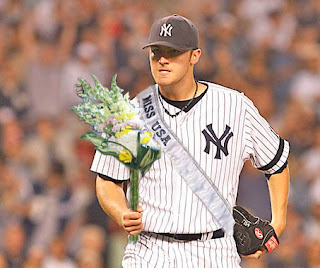 Guess that quad strain was a little more serious than we thought.  Via Andy McCullough, the Yankees are putting Derek Jeter on the 15-day DL today, retroactive to July 12th, and will call up Brent Lillibridge to take his place on the active roster.

This doesn't spell good news for Jeter moving forward, as the team did attempt to talk down the seriousness of the injury after he left that game while still acknowledging the DL was a possibility.  It all adds up to Jeter not being ready physically to handle full games and chances are he won't be physically ready when he's available to be activated next week.  A 40-man move will have to be made to clear a spot for Brent Lillibridge.  No word on what that move is just yet.

Posted by Unknown at 9:19 AM No comments:

A-Rod To Return On Monday

Alex Rodriguez went 1-4 last night in his first rehab game with Triple-A, clubbing a home run to right field and hitting another deep drive to right in his first AB.  The bigger A-Rod news came off the field later last night when the team officially announced that they plan to activate Alex on Monday when his 20-day rehab window expires.  Obviously that comes with the big "if" asterisk, as this weekend's Triple-A slate includes 4 games.  Rodriguez will likely play in all 4 of those games and will need to come through those games without issue before the decision is made.

A-Rod himself said he was starting to feel better at the plate in the last few games and what he's done supports that claim.  If he comes through this weekend without any physical issues there's no reason to not activate him.  He'd be a big boost to the lineup and give the team at least a little more right-handed punch.  At long last, we might finally get to talk about A-Rod's on-field activities again.

P.S.- Makes me sick to my stomach that Randy Levine gave the word to Bob Nightengale, like he jinxed it.  I just feel like everything Levine is involved in turns to absolute dogmess, so it wouldn't shock me at all if A-Rod blew out his knee on Sunday.
Posted by Unknown at 8:51 AM No comments:

Yankee Rotation Out Of The Break Says Something

When the Yankees start up play tonight, they'll do it with some ASB-aided adjustments to the rotation.  They've lined up Andy Pettitte, Hiroki Kuroda, and CC Sabathia to pitch the 3 games in Boston, in that order.  Despite what Joe says, there's definitely more to that decision than just making sure guys get extra days off.

Simply, it shows that the Yankees still don't trust their young pitching.  Big series out of the break, against the team they're chasing in the AL East who also happens to be their blood rival, and Joe doesn't want Phil or Ivan anywhere near that situation.  Nova's been the best starter in the rotation the last 3 turns through and Phil is at least as likely to give the Yanks a better start than Pettitte will if not more likely.  But once again, the Yanks are making the statement that they're going to ride their veterans to the promised land.

Which is not to say it's a bad strategy.  CC and Hirok are the team's top 2 starters, and Andy has more of a big game reputation than Hughes or Nova.  And maybe there's a bit of trade strategy mixed in there too, like not wanting Hughes to get shelled in a nationally-televised game to hurt his market value.  We've seen it happen before against Boston.  Hughes would be tagged to pitch one of the next 2 games in the Texas series and he's a much better pitcher out there in Arlington than he is in Fenway.

Good strategy, bad strategy?  Guess we'll find out in 3 days.
Posted by Unknown at 7:01 AM No comments: