What The Order Of The 2012 Rotation Should Be

I've been thinking about this since almost the moment the Yankees added Pineda and Kuroda to the rotation.  It was inspired by the ideas proposed in the comments section of my next-day reaction post, those voices strongly in the corner of Freddy Garcia as not even the #5 starter, but the #2 right behind CC.  I don't think that will happen, and truth be told, the order of the rotation is really only important when the season begins and in the last month of the regular through the playoffs.  So in constructing my rotation for this season, I envisioned it heading into a 4-game postseason series.

Every good rotation needs an ace at the top, and CC has been nothing short of that since he first put on the pinstripes.  He's big, he's strong, he can give you a ton of innings, he strikes guys out, he limits damage, he's pitched in a ton of big games before, and his performance backs up the big contract he was given this offseason.  The Yankees are building the rotation for the future, but CC is still the head of the rotation right now.  In a big game, who else would you rather have taking the ball?

I've heard all the arguments against him- struggled in the 2nd half, doesn't have a 3rd pitch, will get hurt pitching in Yankee Stadium, etc.  But I've also seen the stuff he has and how it's worked for him, and I can point to his overall body of work last year, in his rookie season, and say that Pineda has the makings of a top-tier starting pitcher.  I don't think the Yankees would trade away their best hitting prospect in a long time for a back-end starter, so why not give the kid this spot?  He's got top-of-the-rotation stuff already; let him use it to grow into a top-of-the-rotation role.

As much as I don't get too concerned with Pineda's negatives, knowing that they are there and could come up to bite him once or twice, I'd like to have a veteran pitcher behind him in the rotation, and that's exactly what Kuroda is.  He won't blow anybody away with his stuff, but he knows how to pitch, he isn't going to get rattled by anything, and he can give you innings even when he isn't having his best stuff day.  Kuroda would almost be like 2009 Andy Pettitte in this role, there to steady the ship if things in front of him get a little rocky.

While some have visions of the future #2 or #3 starter in their heads from the way he ended last season, the more likely case is that Nova tops out as a #4 starter.  And to be a #4 starter with his potential is nothing to be ashamed of, so I'd like to see Nova down a bit in the order where he can work on improving his offspeed stuff and continue to build on the momentum from his strong finish to 2011.  If Nova truly can replicate that success, then his ceiling will raise to that #2-#3 range and we all rejoice.  But I'd rather let him see if he can reach that level in a low-stress role as the #4 guy.

Whether the Yankees end up going with Phil Hughes' potential, Freddy Garcia's recent track record, or A.J. Burnett's contract, I think the winner of the last rotation spot will be in exactly that spot.  And with what each brings to the table, there really isn't a bad option in the bunch for what the Yankees will need from the 5th spot in the rotation.

It seems pretty cut and dry to me.  You put your best in the best spots in the rotation.  But maybe not everybody shares my thoughts.  So what do you think, Yankee fans?  How would your 2012 starting rotation look?
Posted by Unknown at 10:05 AM 4 comments:

I touched on it briefly on Saturday night on the AB4AR Facebook page, but I think it's news worth mentioning again as we're now less than 2 weeks away from pitchers and catchers reporting.

He won't be among those showing up to compete for a spot on the roster, but Joba Chamberlain's rehab from last year's Tommy John Surgery continues to go well.  He threw off a half-mound for the first time on Friday, with Larry Rothschild and Billy Connors watching, and is right on track for an early to mid-summer return.

It's still pretty far off, but I have to imagine Joba's rehab schedule will factor into how the Yankees choose to use whichever 2 pitchers don't get the 5th starter role, assuming all 3 are still around at the start of the season.  The more innings they're throwing are fewer innings that Joba throws once he comes back.  And since Joba has already been designated an official "Bullpen Guy" and presumably has more to offer the 'pen long term, it's probably better for the team if he pitches himself back into shape as much as possible.  Lower-leverage bullpen innings would be perfect for that, but not if they're being soaked up by Freddy or A.J.  Stay tuned. 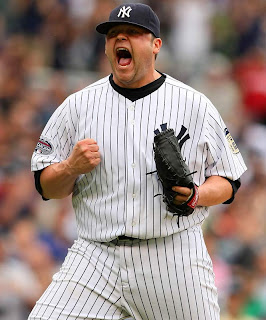