Yankees At The Quarter Pole 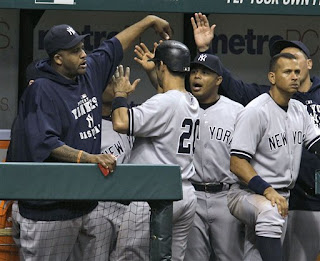 (A rare recent positive moment for Jorge.  Courtesy of The AP)
The season is 1/4 complete after last night's game, and I think it's fair to say that the team is not at the level we thought they would be coming into the season.  There were some question marks, no doubt, but on paper there was a lot more to like about this team than not like.  With what was expected coming into the season, it's not a stretch to say that overall the team has not met expectations.  The performance on the field has been consistently inconsistent, with flashes of brilliance followed by instances of chaos so bad that they would make Little League coaches cringe.  And the recent locker room turmoil is something straight out of "The Bronx Zoo," something that we have not seen from the Yankee organization since that time in the 70s.

Offensively, the Yankees have been a mixed bag.  Plenty of power (MLB-leading 63 HRs), and some general sabermetric stats that look very good: .778 OPS (2nd in MLB) and .343 wOBA (tied for 2nd).  But there are also some areas of concern.  The team .250 batting average is low, and yes it's a byproduct of a .269 BABIP that is near the bottom of MLB, but that still doesn't make it a good value.  Neither is the .243 BA w/ RISP.  And despite the high run totals and solid team OPS, the offense seems to be all or nothing.  The Yanks will put up 5 runs in the first 2 innings and then nothing the last 9.  Or they will be held scoreless through 7 and then manage a measly 1 or 2 when the game is out of reach in the late innings.  The lineup has not been able to get in a consistent groove where guys are producing at the same time, and that inconsistency has been a hindrance in the Yankees' ability to win close games.

Defensively, the team has devolved into a walking disaster lately.  I'm not even going to break into the numbers because you only need the eye test to tell the story.  Too many errors, too many passed balls, and too many mental lapses on simple plays that you just don't see the Yankees have.  We know Jeter doesn't have great range at short, we know Gardner and C-Grand can cover ground in the outfield.  Those things aren't going to change.  What can change and what needs to change is the focus and execution aspects of the simple, routine plays.

Pitching-wise, the Yankees have experienced the same inconsistency that has plagued them at the plate, but I actually think, all things considered, they have actually exceed expectations.  Nobody foresaw Phil Hughes being wildly ineffective and shut down to resolve his arm issues, nobody foresaw Freddy Garcia and Bartolo Colon performing as well as they have, and nobody foresaw Rafael Soriano being a complete waste of space as the setup man.  Nothing about the Yankees' team ERA, WHIP, FIP, or xFIP numbers blows you away.  They are somewhere in the middle of the pack in all of those categories.  But given all the concerns that people had about the staff they were going to start the year with, you can't say that the rotation hasn't held up their end of the bargain and consistently given the Yankees a chance to win.  CC has some things to work on, A.J. is still susceptible to implosion, and who knows what Colon, Garcia, Nova, and Hughes will provide moving forward.  But with the job they have done, and the solid performances of Mo, Joba, and D-Rob in the 'pen, the argument can be made that the Yankees should have won a few more games if the offense was performing up to their expectations.

The bad news is that the Yankees aren't the best team in their division or league right now, at least record wise, and that they still have issues to iron out on the field.  The good news is that they still have the overwhelming majority of the season ahead of them to correct those issues and regain the momentum with which they started the season.  The clubhouse problems are a bigger concern to me right now than the on-field problems, and that could be a bigger factor in determining the success of this team moving forward than situational hitting or grounding into double plays.