Return Of The Meat Tray

In the words of Suzyn Waldman, "OH MY GOODNESS, GOODNESS GRACIOUS!!!  SERGIO MITRE IS ON THE ACTIVE ROSTER, ANNOUNCING THAT HE IS BACK!!!  OF ALL THE DRAMATIC THINGS!!!..."

That's right, kiddies.  The Meat Tray is back.  Back in our lives for another interesting go-round as a marginal mop-up reliever.  Hey, it beats having to watch Buddy Carlyle stumble and bumble his way through an inning, right?  I'm not ashamed to say that I am hoping and praying for some garbage time innings this weekend just we can get a Meat Tray experience. 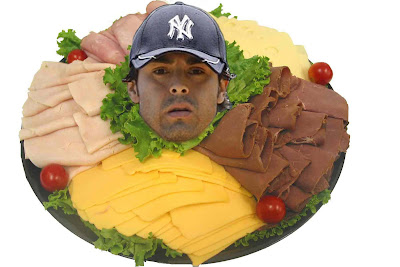 P.S.- Isn't every inning of a game involving the Mets considered garbage time?  RIMSHOT!!!
Posted by Unknown at 2:35 PM No comments:

In honor of the changing of the months, and the upcoming 4th of July weekend, we're going to take a quick lap around the Yankosphere.  It's what the founding fathers had in mind when they wrote the Declaration of Independence.

- Alphonso at It Is High... takes a jab, and a funny jab at that, at the job Eduardo Nunez has done as Jeter's replacement.  It's funny because it's true.

- In the same vein as that post, Brien at IIATMS takes a more statistical look at the Jeter vs. Nunez debate and shows that, despite his decline, Jeter is the better player.  My 2 cents on the matter?  I think Jeter is the better everyday option, even though I do like Nunez for some reason.  But that doesn't mean he should be hitting leadoff.

- Chad at LoHud has the latest injury updates on the Yankee walking wounded.  First Hughes, now Jeter.  The Thunder roster is getting STACKED.

- Mike at RAB makes a case for the Yankees adding Mike Adams to the 'pen.  I like me some Mike Adams, so I would support that move.

- Double dose from the crew at TYA.  First, Matt Imbrogno tries to determine who the odd man out should be with the soon to be overcrowded rotation.

- Second, Mike J-R digs deeper into the wOBA statistic.  Fair warning to old-time baseball people:  You will not want to read this.  Also, you're idiots for not recognizing its value to the game.

- William at The Captain's Blog looks at the Yankees' first half and tries to predict how they'll do the rest of the way.

- Lastly, we've got 2 separate and very entertaining interviews with MiL director Mark Newman.  First, Mike Ashmore gets the scoop on a wide variety of topics, including injury rehab for guys like David Adams, Jeremy Bleich, and Graham Stoneburner, what the deal is with Brackman, and the philosophy regarding handling young pitchers.

- Sensei John Kreese of NoMaas also touched on a ton of points in his interview with Newman.  Definitely a must read.  I was particularly interested to read Newman's take on the "Brien Gordon over the Triple-A guys" decision.
Posted by Unknown at 12:34 PM No comments: