The lower levels were looked at yesterday, and there's a lot to like down there, but those kids are all still at least 2 years away from putting on the real Yankee pinstripes.  Today we look at the top levels of the system, where players are much closer to reaching the show, some perhaps as early as this month.

They don't have the quantity or the "wow" factor of the talent collection in Charleston, but there's plenty of talent to be had in Tampa this year, starting at the front and back ends of the pitching staff.  Nik Turley, the big left-hander, had a breakout season last year and had it cut short after breaking his pitching hand.  He'll be the ace of the rotation that will also feature Jose Ramirez, who despite having a rough 2011 is still young enough and still has the raw stuff to become a notable prospect name again.  Hopefully closing out a lot of their wins in the bullpen will be the dynamic duo of Mark Montgomery and Branden Pinder, arguably the 2 best relief prospects in the entire Yankee system and the leaders of the "D-Rob Clone" Club.  Tommy Kahnle will be joining them after completing his ExST rehab, as will a former starting prospect looking to re-establish himself in Jairo Heredia.

Offensively, the biggest name is J.R Murphy, who will follow up his breakout season in 2011 by being the starting catcher in Tampa, at least until Gary Sanchez gets called up.  Murphy's ability to play multiple positions will guarantee him ABs no matter what.  Next to Murphy, Ramon Flores, Rob Segedin, and Kyle Roller are the 3 most recognizable names in the lineup, and all will be looking to prove their worth as legit prospects.  Slade Heathcott will miss the opening of the season as he is still recovering from shoulder surgery, and it's still yet to be determined on when he can actually return to action.  It could be a make or break year for Heathcott this year.

If there's a roster less sexy than Tampa, it might be Trenton's.  The 2 names that bring any sizzle are Brett Marshall, who will be the hands down best starter in a rotation full of organizational filler, and Zoilo Almonte, who earned himself a spot on the 40-man roster after a big 2011 and will be looking to continue that momentum towards a possible future job in the big league outfield.  Both of these guys impressed the Yankees' coaching staff in big league camp this spring, Almonte by going 4-14 with 4 RBI and and Marshall by throwing 6 innings of 2-run ball with 7 strikeouts over 3 appearances, and could work their way into the top 10 of many 2012-2013 top prospects lists with good 2012 campaigns.

After Marshall and Almonte, the next 2 most interesting names are second baseman David Adams and starting pitcher Graham Stoneburner, both looking to bounce back from injury woes.  Adams has missed almost 2 full seasons after his horrific ankle injury (a common theme lately) and Stoneburner had a wasted 2011 with neck issues.  Other guys of note include infielder Ronnier Mustelier, shortstop Jose Pirela, and relief pitcher Chase Whitley.  The lineup could become more interesting after some mid-season promotions (Murphy, Flores), but outside of Almonte there really isn't a legit big-time hitting prospect to be found. 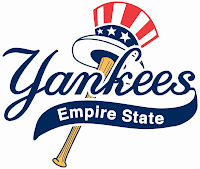 They've got a new name for the 2012 season thanks to their stadium renovations making them a homeless home team this year, but the pitching depth that was Scranton/Wilkes-Barre's calling card in 2011 is still intact.  Their starting rotation includes 5 guys who could all conceivably be starting in the Major Leagues this year, headlined by unanimous top 5 Yankee prospects Manny Banuelos and Dellin Betances.  Those guys get the ink, but the unheralded trio of David Phelps, D.J. Mitchell, and Adam Warren are all worth taking notice of as well and will be above ManBan and Betances in the pecking order if this group's services are required in the Majors.  In fact, recent injury developments could land one of these 3 a job right out of camp.  For Banuelos and Betances, this season should be their final opportunity to refine their repertoires and build innings before making their Major League debuts in 2013.

A glimpse of the lineup doesn't show a lot of promise, but there are a few names of note.  Austin Romine will be the full-time starting catcher for Empire State this year, at least he will be whenever he gets over the back problems that have been plaguing him.  Another down year like last year could kill Romine's stock as a legit Major League catching prospect.  Corban Joseph continues his methodical rise through the system by nailing down the second base job, and could be called up to the Majors in a pinch, as could third baseman Brandon Laird.  Beyond these 3, there are a lot of names that could be used to plug holes in the 25-man roster (Whelan, Pope, Delcarmen, Pena, Curtis, Cust, and maybe even Branyan eventually), but nothing nearly as exciting as Banuelos.
Posted by Unknown at 3:00 PM No comments:

The knowns and unknowns have been covered, the Minor Leagues will be finished later today, so the only thing left is to finally preview the 2012 New York Yankees.  A few big things happened this week that could make the season play out differently than we thought it would, and starting tomorrow all of it will be covered.  The schedule for the final week of the official 2012 AB4AR Season Preview Series is as follows:

If you missed any of the "Knowns/Unknowns" posts from this week, here they are:

- The Infield, The Outfield, The Rotation, The Bullpen, The Bench
Posted by Unknown at 10:27 AM No comments: