Friday Morning "1st Yanks-Sawx Series Of The Year And I'm Going Away" Linkapalooza: 4/20

It's been a long week, people.  A really long week.  My only saving grace from it is that I flew back to CT yesterday to see my family and more importantly, to attend a bachelor party with my best friends this weekend.  Somehow we lucked our way into one of the top-floor suites at Mohegan Sun and it's going to be an absolute disaster show.  And to be able to work some televised Yanks-Sawx action into that show is the icing on what will surely be a booze-soaked cake.  But first, onto the links!

- On Monday, Jay Jaffe of Pinstriped Bible examined the shift in Derek Jeter's numbers, specifically his lowered GB rate, that has contributed to his 2011 resurgence and great start to 2012.

- William Juliano of The Captain's Blog looked at Ivan Nova's elevated slider use since his 2011 demotion to Triple-A to show how Nova's early-season success is more than just luck.

- On Tuesday, SJK of NoMaas went "Seinfeld" on Chris Stewart's earth-shattering 3-RBI game, against the Twins, which is about as surefire a way to get into the Palooza as there is.  It actually would have been awesome if Stewart took off the catching gear mid-game and walked off the field.

- Travis G of Pinstripe Alley took a look at Hughes' early numbers in his first 2 starts and didn't find much to give himself confidence moving forward.

- Shawna Lent of Yanks Go Yard said not to let Jeter's hot start get you too excited about the possibility of him reaching 4,000 hits.  I would have to agree.  I don't see Jeter sticking around that long.

- On Wednesday, William Tasker of IIATMS checked in with his latest "State of the Yankees" address.

- Greg Corcoran of Bronx Baseball Daily investigated whether the Yankees' front office strategy of looking for patient, high-OBP guys was actually hurting them in the postseason.

- Mike Axisa of RAB offered up the latest in his "Teixeira Analysis" series running this week, this post on Teix's BIP numbers from the left side.  If you check out that post, you can find links to the other 2 in the series from earlier in the week.

- Matt B of Yankees Fans Unite pointed out how Mo's durability during this time when closers are dropping like flies is another testament to his greatness.  If you're heaping praise on The G.O.A.T., I'm interested.

- On Thursday, Mike Eder of TYA continued his streak of stellar PITCHF/x analysis of opposing pitchers.  I cannot stress enough how much you need to be checking these posts out on the reg.  I can barely sit down to go through PITCHF/x data for one post because there's just so much going on.  Eder is doing it EVERY DAY.  If you want to have a great idea of what to expect from whatever starter the Yankees are facing each game, make these posts a must-read.

- Ray Rothfeldt of Zell's Pinstriped Blog commented on the early struggles of the starting rotation and set his expectations for the returns of Andy and Michael Pineda.

- On Friday, The Mighty Casey of Bleeding Yankee Blue joined me in calling out Bobby V for his shenanigans and openly rooting for him to fail.

The downside to the bachelor party/Yanks-Sawx festivities is that I won't be bringing my computer with me, and so the blog will take a short hiatus over the next day or two.  I'm hoping to be coherent enough to catch up with the events I missed by Sunday afternoon, but that might be up in the air as well as we're all planning on hitting up a bar to check out the "Sunday Night Baseball" game.  By Monday I'll be back and things will start operating normally again, but you're going to have to survive without your daily AB4AR fix for the majority of this weekend.

With that, I leave you with the Friday Jam, which is this classic from STP.  Take care, enjoy your weekends, and I'll be back in a few days.  Go Yankees! 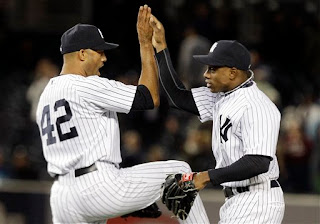