How About This Option For DH?

It's something I never even gave the first thought to, so unfortunately I can't take credit for it.  But my man Steve S. of the TYA family posted this genius proposition earlier today when he suggested an A.J. Burnett-for-Travis Hafner trade.

It makes perfect sense.  Hafner fits the Yankees' need for a left-handed DH to likely platoon with Andruw Jones.  And with his injury history, you have to figure he's going to be out of the lineup enough to allow the Yankees to use that spot for A-Rod and Jeter and Teix and whoever else is going to need it at one point or another during the season.  And the fact that the Yanks would be ridding themselves of A.J. to fill the DH need is a classic "2 birds with 1 stone" situation if I've ever seen one.

Read the post and join the discussion.  And Cash, if you're reading this, make it happen!
Posted by Unknown at 5:18 PM No comments: 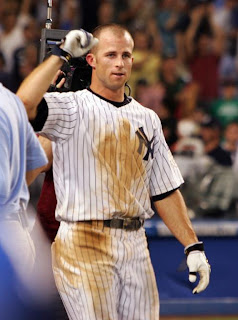 The Brett Gardner signing is a story that broke a few days ago, but it definitely warrants mentioning in greater detail.  On Friday afternoon, the Yankees and Gardner agreed to a 1-year/$2.8 million deal, avoiding arbitration in the process.  The Yankees originally offered Gardner $2.4 mil, he was asking for $3.2 mil, so the agreed upon deal falls right in the middle.  The beauty of this deal is not so much what the Yankees are paying Gardner, but the value the Yankees are getting for their $2.8 million.  Consider this:

True, Gardner is not the type to take home any end-of-the-year awards for his work at the plate.  He had a respectable .358 wOBA in 2010 and dropped to .330 this past year, so he's not a Silver Slugger contender.  But his value to the Yankees and in terms of generating WAR cannot and should not be understated.  He is an elite defensive outfielder with the ability to play multiple outfield positions at the highest level.  And at the plate, he has the ability to work counts, draw walks, and put the ball in play at above-average levels, which allows him to use his speed on the basepaths to create scoring opportunities.  Gardner's skill set gives the Yankees contingency plans for both Curtis Granderson in center if they decide they can't afford him after next season, and for Derek Jeter in the leadoff spot if his age-related decline finally forces Joe to remove him from that role.

If you asked me if I'd like to have one of the top 3 outfielders in total WAR over the past 2 seasons who's in his prime at 28 years old on my team this season for the price of $2.8 million, I wouldn't even have to think before I said, "hell fucking yes I would!"  The Yankees have the benefit of not even having to be asked the question, because they've already answered it for themselves.  And if Gardner rebounds offensively the way all the projections think he will, this is going to be another steal of a deal for the Yankees in 2012.
Posted by Unknown at 11:16 AM No comments: