-I don't know what Joe Girardi smoked before the game today, but it had to be good shit seeing as he's out in Cali and he basically coached the game today like a guy who was focused on what flavor Doritos he wanted rather than a manager who needs to be getting his team ready for the postseason.

-Exhibit A- Shelley Duncan starting the game in right field.  Even before today, it was clear to everybody but Joe that Shelley has no business being in the outfield unless he's chasing a member of the opposing team during a brawl.  After today, it needs to be written into any and all future baseball contracts that Shelley Duncan signs that the only time it is acceptable for him to be playing right field is at a family cookout.

-Exhibit B- Joe tries to get cute in the 7th inning and match up with the Angels by replacing Damaso Marte with Jonathan Albaladejo.  Granted I've praised J-Alba for his play late, but let's be realistic, he isn't going to be on the postseason roster, at least not for the Divisional Series.  Marte has shown flashes since returning from the DL but could still use all the reps he can get to get back to top form.  If you want to have confidence in him, you might as well give him a shot to get a righty out.  And if you're going to match up, get Bruney in the game to get his shit figured out.  The fact that Joe didn't go to Bruney shows where he might stand in the postseason pecking order but if Dave Robertson can't go, the Yanks ARE going to need Bruney.

-Exhibit C- Playing the JV team.  Look, I know the Yankees are older and it was an afternoon game after a night game, but assuming they continue to hold the best record in the AL and get to choose their first-round schedule, there are going to be plenty of off days for their 30-and older vets to rest.  The important thing now is to make damn sure you lock up that division title and that freedom to choose the schedule.  My uncle sent me a text late in the game asking why Joe wasn't stepping on the Angels' and essentially every other team's throats and this, once again, falls on Girardi and his decision to sit half the starting lineup today.  He's looking weeks and weeks down the road to the postseason when he should be focused on the next game like he always says he is.  Play the damn starters, rattle off another 7, 8, 9 wins in a row, strike some fear into the other teams, and go into the playoffs with momentum.

-I don't know who the fuck Freddy Guzman is or where he came from; my uncle and I are working under the belief that he is some dude who was bumming around Steinbrenner Field in Tampa when George stumbled out of his office, saw him, and assumed he was actually Mickey Rivers, so he stumbled back inside and ordered Girardi to play him.  The one thing I do know is that if you get this fucking kid on base, he's a guarantee to steal at least one.  Between him and Brett Gardner, the Yanks have more pure speed than they've had in the last 15 years combined.

-Is it me or does Mo seem not quite 100%?  I can't put my finger on it, but it seems like there might still be some lingering soreness in his groin and he's just getting by with his B-level stuff right now.  But when you're as God-like as Mo, your B-level stuff will get you further than most guys' A-stuff so as long as he's saving games that's all that matters.

-Last but not least, another bizzaro move by Joe that thankfully turned into a feel good story today was Ian Kennedy working the 8th inning.  After suffering an aneurysm scare that is all too familiar for Yankees' fans who remember David Cone, Kennedy has made it all the way back to pitch this year and it's good to see him out there as he may become another important factor in the rotation next season.

I'm sure most Yankee fans probably sat there wishing he still had the aneurysm when he hit a batter and walked 2 more to load the bases, but our little Ian has apparently grown up and learned a new trick called "getting out of trouble," which he did quite well with a strikeout and a flyout.

John Sterling's reaction was a little less than happy upon realizing Kennedy was on the mound...

...but the bottom line is the Yankees have yet another young arm to work with moving forward and his name is: 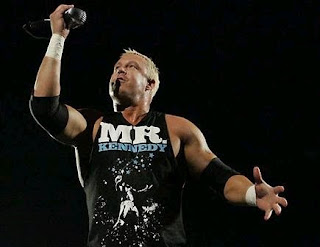