Yanks Could Call Up David Adams Next Week

I haven't seen it confirmed by many other reporters, but according to Mark Feinsand the Yankees are planning on calling up David Adams next week to assume the full-time replacement third base job while Kevin Youkilis is on the DL.  Adams, who was surprisingly released by the team in March due to the roster problems, is eligible to be called up on May 15th per MLB's rules on player release and re-sign and would be another option to help cover for the loss of Youkilis.  With Eduardo Nunez still banged up, the team has few options on the left side and Chris Nelson has been little help.

Adams, who also happens to turn 26 on May 15th, has been raking since returning to Triple-A SWB.  He's currently hitting .314/.404/.477 in 99 PA, with 9 XBH, 9 RBI, and a healthy 11.1% BB rate.  He's been the full-time third baseman for the RailRiders, and has also recently got some work at second and first.  Adams' right-handedness would not only be a likely upgrade to the production of Nunez/Nix/Nelson, he could also offer some depth behind Cano and Overbay on the right side, and they're two players that could probably use a day off.

Adams doesn't project as that type of hitter in the Majors, but he's a likely upgrade over what the Yanks have right now and this is his best shot to break into the show.  If it happens, it sounds like a good move.
Posted by Unknown at 11:17 AM No comments: 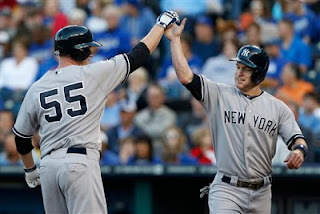