If you need a little something to do to kill time before this afternoon's game, go ahead and check out this FanGraphs interview of sorts with Yankee prospects Slade Heathcott and Tyler Austin.  David Laurila spoke with both players and their Double-A hitting coach on their respective offensive games, approaches at the plate, and what they're trying to work on, and provided some brief scouting report information on each.

The best part about this is that it's not a typical "Q&A" piece where you just get little snippets of what each player said.  The entire article is basically Heathcott and Austin talking uninterrupted about their games, swings, approaches, and it gives you a really good idea of where each guy is as a player.  The overall theme for Heathcott, from his coach to the scouting report to his own first words, was the need to improve his approach and get more at-bats.  Despite his age, he's low on reps for a Double-A player and he's already missed some time this year with a neck issue.  Austin came across as much more mature in his approach and techniques at the plate, and the constant reference to his multi-field power is very encouraging when thinking about his future as a Major League prospect.

It's not often you get in-depth discussion like this from top MiL prospects like Austin and Heathcott, who were 3rd and 5th respectively in this year's AB4AR Top 30.  Definitely a good read if you're a prospect hugger.
Posted by Unknown at 10:26 AM No comments: 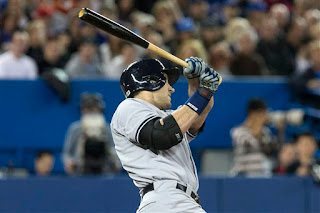