You Cannot Stop Hank Steinbrenner, You Can Only Hope To Contain Him

"I think, maybe, they celebrated too much last year.  Some of the players, too busy building mansions and doing other things and not concentrating on winning. I have no problem saying that."

"... I was just saying, maybe they were riding the wave of '09 a little too much, and it happens sometimes.  This year in spring so far, from what I've seen and what I've been told, they've come in with a real, new drive and determination -- the kind they had in '09." (via The AP)

Hank.  Buddy.  Pal.  What are you doing here?  You know I'm a big fan of yours.  I love the bluster of the old man that you try to re-enact.  I love the potshots at the Red Sox.  But taking a shot at Jeter over the 2009 World Series?  Come on now.  That's just foolish.

If you were so concerned about the team's focus in 2010 then you should have said something in 2010, not waited until after that season had ended and the 2011 season was starting to chime in.  2009 was what it was and 2010 was what it was and they're both in the past.  The team wanted to win and played hard in 2009 and they wanted to win and played hard in 2010, the results just didn't come the same.  The team is going to play hard in 2011 and they're going to want to win just as much as they did in the past 2 seasons so there's no need to start jabbing at players to try to provide extra motivation.

Jeter can handle his business, A-Rod can handle his business, Joe can handle his business, they all can handle their business.  You just need to shut up about them and focus on what you do best, that being finding some stuff to tweak Fraud Sox Nation on and start stirring that pot a little bit.  They're sitting all high and mighty ovah they-ah in Beantown thinking they've gawt the fahhckin' toitle wrapped up with Gawnzawlez and Cahhl Crawfehd.  Tell them to check the calenders or count their rings or something.  Your boys are going to be fine. 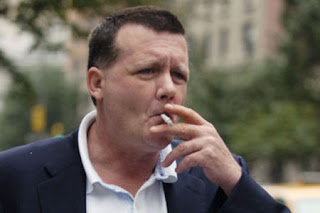 Oh and put that cigarette out, dude.  Bad example for the young fans.
Posted by Unknown at 12:38 PM No comments: