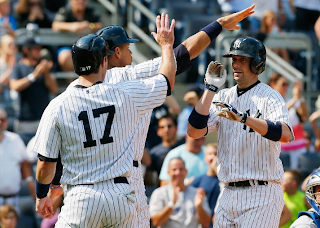 (Not too familiar with home plate celebrations eh, Chris?  Courtesy of Getty Images)

The Yankees are approaching the AL East-heavy homestretch of the 2013 regular season, and they've built some positive momentum with a 7-3 run over their last 10 games.  The lineup is once again MLB-caliber, the starting pitching has been better, and the team returned home this afternoon fresh off a series victory on the road against their biggest rival.  This 4-game series against Toronto is critically important if the Yankees intend to stay even remotely close in the Wild Card and they got off the right start in the day half of today's doubleheader with a solid win.

- Ivan Nova struggled with his 2-seamer command out of the gate and got into a ton of trouble in the top of the 2nd.  After giving up 2 runs and getting 2 outs, Nova gave up a big 2-run double to Rajai Davis on an 0-2 fastball to make it 4-0 Jays.

- The Yanks got a big chunk of that back in the bottom of the 3rd when Brett Gardner and Ichiro each got on with 1 out, setting the table for a 3-run Robinson Cano home run.

- They took the lead in the bottom of the 6th in a most unexpected way.  With 2 outs and Alex Rodriguez on first, Jayson Nix worked a 5-pitch walk against Neil Wagner to bring up Chris Stewart.  After getting a look at 3 fastballs, Stewart hit the next one out for his own 3-run homer and a 6-4 Yankee lead.

- Give Nova credit.  He wasn't at his best today, and much like his last start he gave up a lot hits and had to work out of trouble with a few big double plays.  But he didn't allow any more runs and pitched into the 7th.

- Cano tacked another run on in the 7th with a ribbie double, his 4th hit of the day, and Brett Gardner drove in another with a sac fly in the 8th.  Joe tried to get cute with the 4-run lead and go to Joba, but he eventually smartened up and called on Mo to get the final 2 outs after Joba walked Davis.

Major League Baseball announced its ruling on the Ryan Dempster-Alex Rodriguez incident today.  Dempster was suspended for 5 games and fined for plunking A-Rod and Joe Girardi was fined an undisclosed amount for arguing with umpire Brian O'Nora.

The Dempster suspension doesn't come as a surprise.  MLB had to do something to punish him for what he did, lest it become target practice on A-Rod for other pitchers.  What's disappointing is that, as is usually the case with pitchers, the suspension really doesn't mean anything.  The Sawx have a few off-days in the next week, pushing their entire rotation back to the point that Dempster won't even miss his next start when the 5 games are up.  If you're going to suspend a player, he should actually have to miss a game that he would have otherwise played in.

As is also usually the case, O'Nora got off without any punishment for his role in the plunking.  Dempster absolutely should have been ejected from the game and wasn't.  Once again the umpires don't have to be accountable for their actions and conduct on the field while the players and coaches do.  Unreal.

Posted by Unknown at 2:36 PM No comments:

A Doubleheader Of Divergent Career Paths

If you're looking for a quick visual representation of the Yankees' organizational struggles when it comes to developing starting pitching, look no further than the 2 guys starting today's doubleheader.

Ivan Nova was an undervalued international signing.  He's been a low-ceiling starter prospect, better than advertised Major Leaguer, Game 1 postseason starter, back end rotation fodder, human batting cage pitching machine, Minor League reclamation project, extra pitching staff depth, and injury question mark all in the span of 2 years.  Currently he's the second best starter in the 2013 rotation and has gotten his career back on track with the transition to an exclusive fastball/curveball approach.

Phil Hughes was a can't miss, #1, mega-hyped American prospect, expected to be the future ace of the staff once the Core Four era was over.  He's pitched brilliantly at times, he's pitched inconceivably bad at times, and his career has been defined by his inability to consistently do the most basic things on a pitching mound that a pitcher needs to do to be successful.  He's been the worst starter in the rotation by far this season and as he heads towards the possible final weeks of his Yankee career he's watching his free agent value deteriorate with every bad pitch.

These are the best the Yankee system has generated in the last 5-7 years, and that's not saying much.  Things look brighter for Nova now than Hughes, but based on his track record there's no way to know how long this stretch of effectiveness will last and if it will carry over into next year.  We'll get another look at both of them today and another look at what could have been and what may still be.