Report: Yanks Not Making Any More Moves Until Tanaka Signs

Things have slowed to almost a snail's pace as the offseason moves into its final stanza and Spring Training starts to vaguely appear in the distance.  A report from Steven Marcus of Newsday confirms that the Yankees will keep it at that pace until the Masahiro Tanaka sweepstakes conclude.

"The Yankees' pursuit of Japanese righthander Masahiro Tanaka has essentially frozen any other additions to the big league roster.

"We are doing nothing until Tanaka resolves," a club official said Wednesday."

"Duh," the rest of the Yankee fanbase also said Wednesday.  In all seriousness, this makes sense from the Yankees' standpoint and is the right approach to take.  There's not much left out there on the free agent infield and bullpen markets and the team isn't in a rush to go after what is still there.  Tanaka represents their biggest opportunity for improvement in their biggest area of need and they should be focusing all their energy over these next 9 days towards signing him.  As I've been saying all offseason, they've put too much time and effort into Tanaka to risk losing him now.  The Dodgers look like they're focused on getting Kershaw locked up before the arbitration figure deadline on Friday.  Now's the time to strike and land Tanaka.
Posted by Unknown at 4:00 PM No comments: 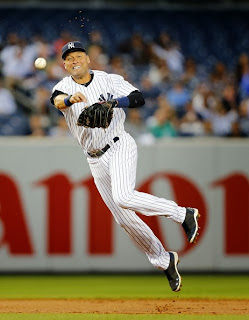 Report: Yanks Reach Out To Padres About Infield Depth

When Ken Rosenthal reported over the weekend that the Yankees weren't going to sign any more infielders to Major League free agent deals, he didn't say anything about not trading for Major League talent.  The Yanks have been quiet on the trade front since dumping Chris Stewart, but a report from Jon Morosi earlier in the week may suggest a change there.

According to Morosi, the Yanks have made a "trade inquiry" to the San Diego Padres about infield depth.  The Papas, while not exactly flush with it at the moment, have some pieces they could deal and they're definitely in the market for some pitching help.  This obviously brings the name Chase Headley back to the forefront of most people's minds, but Morosi reports that Logan Forsythe "is the most realistic target", not Headley.

Forsythe, 27, is a natural second baseman who played every position except first base, catcher, and center field in 2013 while putting up a .272 wOBA in 243 PA.  He's only a .241/.310/.349 career Major League hitter but raked at every level of the Minors before breaking in.  He's almost like a right-handed version of Dean Anna, and if San Diego isn't asking for too much in return he's worth taking a chance on.  I'd still rather have Headley though.

Yesterday was the deadline for arbitration-eligible players to file, and as expected the 5 eligible Yankees all filed.  It's more of a procedural thing than anything else.  The real action starts on Friday when the players and team exchange salary figures and then in February when the hearings start, provided both sides don't come to an agreement before then.  In case you've forgotten, here are the 5 eligible Yankees and their respective MLBTR projected 2014 salaries:

Off the top of my head, I wouldn't be surprised to see D-Rob get a little more based on his excellent body of work the last 3 seasons and I think Gardner could get significantly more than 4 mil because of the value his speed and defense creates.  The other 3 should come in right around those projected figures, but we'll see what happens Friday.