A New Roster Move Low Has Been Reached

That's how I feel right now.  Like Lloyd Christmas in "Dumb And Dumber."  When Zoilo Almonte hurts his ankle and hits the DL and his replacement is Melky Mesa and his 36.7% K rate in Triple-A fresh off the Triple-A DL, and Alberto Gonzalez is being DFA'd to clear a spot for the return of Thomas Neal to do the righty DH duties, that's when I've had enough with this dump.  Non-stop injuries and non-stop terrible injury replacements.  It's reaching comically-bad levels of low now.  Just as uninspiring as uninspiring gets.

Joe's Old Mother Hubbard and he's just got nothing in the cupboard.  It wouldn't shock me if A-Rod's entire body just separated from itself in his final rehab AB tonight and one of Jeter's legs fell off.  At least it's not all bad news.  Still got that Overbay-Wells-Hafner trio locking down the 4-6 spots in the order...

P.S.- Yep, absolutely mixed in a slight "Major League 2" reference just lines after the "D&D" one.  And I did it with a hangover, a possible seasonal allergy attack, and a charred hand.  No DL trips for this guy though.  Rub a little dirt on it and get back out there.
Posted by Unknown at 3:06 PM No comments: 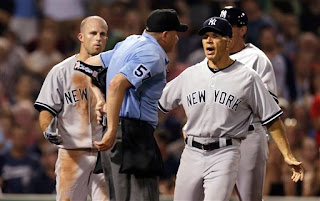 Second half started the same way the first half ended, with the Yankee pitchers giving up untimely home runs to dig a whole for the offense and the hitters doing little to try to climb out.  Same shit, different day.  Do I even need to recap that?

- Nobody: Maybe Brett Gardner for scoring a run on his own with a bunch of stolen bases, but he got tossed early for throwing his helmet after a bad third strike call and he didn't get a hit.  Nobody had more than 1 hit.

- Andy Pettitte: 6.1 IP, 6 H, 4 ER, 1 BB, 4 K.  Another so-so outing for Andy, who looks very much like a 41-year-old pitcher on his last legs and likely will for the remainder of the season.  4 runs shouldn't be a guaranteed loss but it is these days and that's the number of runs he always seems to give up.  Putting his team down 3-0 on 2 early HR in the first 2 innings was not helpful at all.

Second game of the series is this afternoon, on FOX I believe.  Hiroki Kuroda and John Lackey are the starting pitchers.
Posted by Unknown at 9:04 AM No comments: