It's been one of many slow-playing offseason storylines for the Yankees, but a resolution to the Alex Rodriguez steroid suspension saga could finally be coming.  According to a report earlier today by Bob Klapisch, Major League Baseball is expecting the arbitrator to hand down his decision "very early in January, possibly right after New Year's."

This is in line with some other reports/theories that have been floating around the Yankosphere lately.  The timeline for a decision was always set in early-to-mid January after the hearing wrapped up last month, and with HOF announcement set for January 8th, the prevailing thought is that MLB would want to get the A-Rod announcement out of the way early or late enough to not distract from that.

As far as the Yankees are concerned, a post-New Year's decision would be ideal.  They've put the brakes on their offseason activity since their payroll started creeping close to the luxury tax ceiling, and probably aren't going to make any more moves to address third base or their pitching staff until they know how much of A-Rod's money is going to be coming off the books.  If this schedule holds, it will put an end to a long, bizarre, frustrating, and often entertaining part of the 2013 offseason.
Posted by Unknown at 2:00 PM No comments: 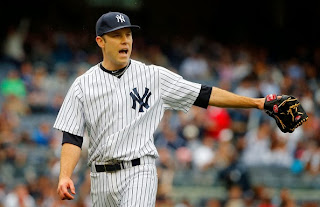 Monday Morning Food For Thought: The Old Get Older

Interesting article by Joel Sherman over the weekend, one that leads off with this doozy of a line:

"The Yankees have accomplished the near impossible — they had the oldest player in the majors (Mariano Rivera) and the oldest starter (Andy Pettitte) retire and yet somehow have gotten older this offseason."

To be honest, I hadn't even really paid much attention to the age factor of this offseason's moves.  I was just happy that the Yankees were spending money on players who could still actually play and would actually make the team better in 2014.  But Sherman's point is valid and there is something to be said for the fact that the Yankees will enter next season without a single player under the age of 30 in their starting lineup.  They're no strangers to age-related regression and age-related health problems wreaking havoc on their roster, and by getting older this offseason they've done more to increase the risk of that happening again than lessen it.  Beltran, McCann, and Ellsbury all come with some form of legitimate injury concern, and they're being added to a mix of CC, Jeter, Teix, Gardner, and A-Rod (maybe) that already comes with plenty of concerns of their own.

Will next year's team be better than the one that opened 2013?  Absolutely.  Will it be any safer from the risks associated with being an older club?  Maybe, maybe not.