Two weeks in a row of linkarounds!  I might be on to something here.  I'm thinking this will definitely become a weekly feature at AB4AR because there's just too much good stuff going on around the Yankosphere to not do it.  Let's get to the links!

- On Tuesday, Rasheeda Cooper of Bomber Boulevard had one of the better Jorge Posada tribute posts that I read this week.  Well done, Rasheeda.

- On Wednesday, Brien Jackson of IIATMS threw another name into the lefty DH hat in the form of The Giambino.  It may be unlikely, but not a bad option.

- Also on Wednesday and also on the topic of DH, Larry Koestler of RAB presented his list of DH trade options.  Some more intriguing names in here as well.

- Fishjam25 of Yankees Fans Unite expanded the trade scope for hitters to include some potential candidates to replace the quality young bat the Yankees lost in Jesus with these 7 suggested trade targets.  I would move A.J. and a prospect or 2 for any of those guys if the other teams were interested.

- Josh Norris of Minor Matters Trenton got the jump on the complete Baseball America Top 30 Yankees Prospects list last night via his Twitter feed.  Some interesting choices on that list to say the least.

- BrianV21 of The Greedy Pinstripes likes Phil Hughes for the 5th spot in the rotation.  I like his logic that Hughes offers the Yankees the most both in terms of production and potential return trade value.

- Rebecca Glass of Pinstriped Bible, on the other hand, seems to be leaning towards sticking Phil back in the bullpen with her post today.

- Frank Campagnola of Pinstripe Alley ponders whether A.J. can have a bounceback year in 2012 or not.  I appreciate the effort, Frank, but personally I'm still not buying what A.J. has to sell.

-Robbie Clark of Yanks Go Yard got political with his "State of the Yankees Universe" address on Thursday.  Although there weren't as many as Barry O got the other night, there are definitely a few standing ovation-worthy points in there.

- 2 from my TYA homies to close it out.  First one from EJ Fagan yesterday, who campaigned again for the Yankees to go after Yoenis Cespedes as some OF insurance for their soon-to-be-FA pair of C-Grand and Swish.

- Also from yesterday and also on the topic of the outfield, Michael Eder suggested trading for Andrew McCutchen and wondered what kind of prospect package it would take to get him.  Here's a hint, Adam Warren and Jake Cave would not get it done.

For the Friday afternoon jam we're going with Queens Of The Stone Age.  I know Drew Magary would approve, and I hope everyone else out there does as well.  Don't work too hard this afternoon, people, and enjoy your weekends.

P.S.- Message to all the readers and members of the AB4ARmy out there.  Help make the Linkapalooza better each week.  If there's stories I'm missing or that you want to make sure I include during the week, email me the links, and Friday Afternoon Jam requests would also be appreciated.  I'm curious to know what everybody out there listens to.
Posted by Unknown at 2:00 PM No comments: 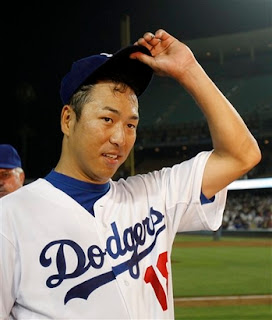 (And a tip of the cap to you, good sir.)
“I feel happy to be a part of such a storied franchise, which is always in contention for a World Series.  I am also very proud to be a part of this current team, which boasts so many great players. As a member of the Yankees, I would like to do my part by doing the best I can throughout the season. I hope that I can make a difference in achieving the team’s ultimate goal, which is to win the World Series.”

So did Hiroki Kuroda just lay down the greatest introductory statement in Yankee history or the greatest introductory statement in sports history?  Holy shit!  That's a tough act to follow if you're whoever the Yankees either sign or trade for to be the lefty DH.  Better start writing, re-writing, and rehearsing your lines now because Kuroda set the bar pretty damn high.  That's one good way to say hello to your new teammates.  Here's another: