It happened as he tried to beat out a double play at first base in the bottom of the 4th and it immediately didn't look good.  Francisco Cervelli grabbed at his right hamstring and collapsed to the ground after crossing the first base bag, and he just limped off the field and straight into the locker room.  At best, he tweaked the hamstring similarly to how Mark Teixeira did last week.  It looked a lot worse than that though, and the Yankees are really, really short on healthy infielders right now.

Kelly Johnson will probably have to move to 1st base for the rest of this game and Joe might have to play Jeter at short.  This situation gets worse and worse.  More on this story as it comes out.

** UPDATE 8:38 PM- Joe confirmed on the ESPN broadcast that it was a right hamstring injury for Cervelli.  Carlos Beltran has come in to play first base for the first time in his career and Ichiro will go to right field.  Check the live blog below for any more updates. **
Posted by Unknown at 8:34 PM No comments: 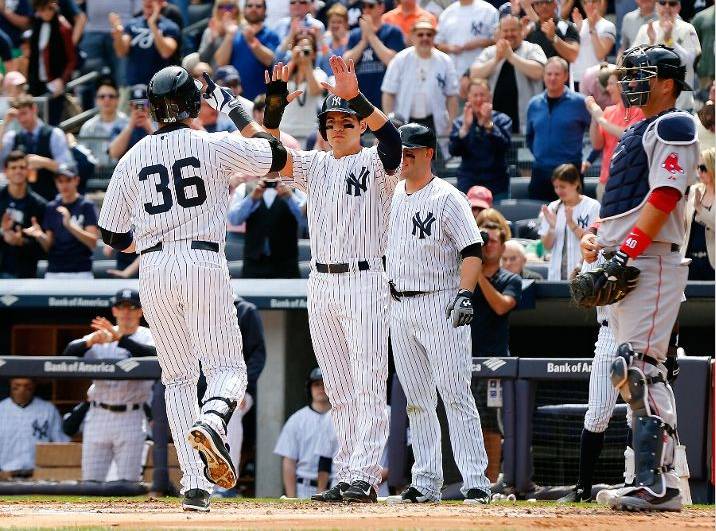 There's been a lot to like from this first Yankees-Red Sox series of the 2014 season.  The Yanks have gotten generally good starting pitching in all 3 games, with only a few bad pitches making CC and Hirok's lines look worse than they actually pitched.  The D-Rob-less bullpen has looked very good, with Dellin Betances and Adam Warren looking more and more like legitimate middle relief weapons.  And the middle of the order is starting to come around now that Carlos Beltran and Alfonso Soriano are hitting consistently and Brian McCann broke out of his early slump with 2 jacks on Saturday.

The perfect capper to this positive series would be a victory tonight to secure the series victory, and that's a perfect situation for the first AB4AR live blog of 2014.  By now you know there won't be any Jeter in tonight's lineup.  Here's how the Yankee will look without him:

First pitch is a little over a half hour away.  Live blog goes live after the jump.

Jeter Out Tonight With A Tight Quad

Girardi: Jeter's quad got tight on Friday. Had yesterday off. He's getting today off because of it too. No tests scheduled.
— Bryan Hoch (@BryanHoch) April 13, 2014

With a lefty on the mound tonight in Felix Doubront and a day off yesterday afternoon, there was no reason for Derek Jeter to not be in the lineup tonight.   Unless of course, there was something physically wrong with him.  Something was obviously up in that department when the lineup was announced a little over an hour ago and Dean Anna was listed as the starting shortstop again, and sure enough, something related to Jeter's legs is the cause for his absence tonight.

The reports on the quad don't make it sound like a big deal.  No tests are scheduled on it and Joe did tell the media he could use Jeter tonight in a pinch if he had to.  Sounds like more of a precautionary thing than anything else, giving him an extra day of rest when there's an easy opportunity to do so.  Right now, the plan is for Jeter to be back in the lineup on Tuesday.

It's been a tough start to Ivan Nova's 2014 campaign after a pretty good Spring Training.  His pitch plot for his first 2 starts is above and it tells the whole story of his first 2 starts.  He just isn't throwing enough strikes.  He's all over the place with his 4-seamer and his curveball, the 2 pitches that he leans on to be successful, and he can't afford a repeat of his early lack of command against a patient veteran Red Sox lineup tonight.  The fastballs need to be on the corner, the curveballs need to be somewhere near the zone to get hitters thinking about swinging at them.  If Nova can tighten up his command and shrink the spread of that pitch location plot tonight, it'll be a step in the right direction and could give him some positive momentum to build on.

Posted by Unknown at 1:11 PM No comments: