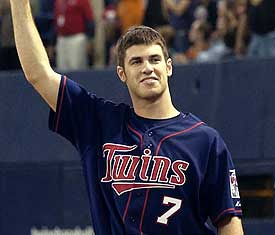 Reigning AL MVP Joe Mauer and the Twins agreed to a 10-year contract, according to a Minnesota TV station.

WCCO reported yesterday the catcher and the team reached a preliminary agreement that will prevent Mauer from becoming a free agent after this season.

The Minneapolis Star Tribune reported earlier yesterday that the framework for a deal was in place, but ESPN said a final agreement was not complete. (story courtesy of the AP)


Guess Joe Mauer isn't interested in winning World Series titles any time in the next 10 years. Oh well, have fun competing for the Wild Card every year, kid.

And the Twins can cut the shit with the "nothing has been finalized yet" garbage. Everybody and their mother knows this deal is getting done no matter what it takes. If you're the Twins and you fail to lock up the face of your franchise and one of the 5 best players in the game with a fancy new stadium opening up this year, you might as well forfeit the season and move the team to another city.

Note to Jesus Montero: Time to step up and work on your defense to prove you can be an everyday catcher at the Major League level because once this deal goes down, the job is yours to lose after Jorge gets put out to DH pasture.
Posted by Unknown at 3:03 PM No comments: