Some Pre-Game Food For Thought For The Yankee Hitters

It's been a bit of an up-and-down start for the Yankee offense so far.  They've worked counts, drawn a lot of walks, and have done damage in short bursts in their first 8 games.  They've also had the same RISP struggles that plagued them at times last season and during last year's ALDS loss to Detroit.  They're 3-4-5 hitters, while still being pitched to with the respect that elite hitters of their caliber deserve, have combined for just 1 HR and 3 RBI, the sole dinger coming from A-Rod on Friday.  Suffice it to say that the offense is nowhere near clicking on all cylinders right now.

Well, if anything can help start to change that it's tonight's starting pitcher for the Angels, Jerome Williams.   He's not a bad pitcher by any stretch of the imagination, but something tells me that he could be walking into the lion's den tonight.  A righty pitching in Yankee Stadium with a severe home/road split, who struggles to keep the ball in the park on the road and likes to throw a lot of 2-strike fastballs is the type of pitcher this lineup can feed on at home and could be just the medicine the Yankee offense needs to start feeling better.  With the positive things they have been doing at the plate, they should put themselves into a lot of situations where they can tee off tonight.

So screw the history against pitchers you've never faced before, boys.  You're good hitters and you're getting a guy tonight whose history suggests he's going to give you good stuff to hit.  Don't waste it.

P.S.- Props to TYA colleague Mike Eder for the dynamite PITCHF/x scouting work on the Angels' staff this weekend.
Posted by Unknown at 5:30 PM 1 comment: 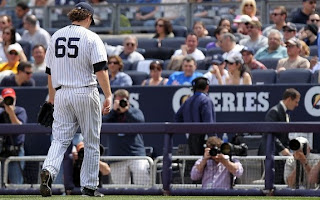 Phil Hughes has made 2 starts in this young season, and he's totaled just 8 IP in those 2 starts.  As I touched on yesterday, he's taken a step back from the progress he made in ST putting his game together and it's going to cause the rotation talk to heat up quickly, even with Andy still rehabbing in High-A and Michael Pineda just throwing on flat ground.

- A day after a solid all around "yin" game from the Yankees in their home opener (great starting pitching, timely hitting), yesterday was the ugly "yang" to that game. The starting pitching was bad and the offense was generally lifeless against Angels' starter C.J. Wilson.

- The hitting with RISP struggles continued, as the Yankee batters managed to hit just 1-11 in that category.  Their 4 biggest bats (Cano, A-Rod, Teix, C-Grand) are all hitting below .230 on the young season, with Teix and C-Grand both hitting just .188.

- As is usually the case with Hughes when he struggles, he just wasn't able to hit his spots consistently.  He missed on the corners with his fastball a lot when he was ahead in the count, and couldn't keep his slider or curveball down in the zone.  The big blow that ended his day was a 3-R homer by Howie Kendrick on a flat slider that slid right down the middle of the plate.

- Wilson was good, but not great, and the Yankees could have done much damage against him to keep themselves in the game.  They had runners on the corners in the 1st inning and runners on 2nd and 3rd multiple times and only managed the lone run on Cano's RBI single.

David Phelps: Phelps was once again money out of the bullpen, relieving Hughes in the 4th inning and giving the Yankees 5.1 IP of 1-run ball to preserve the rest of the bullpen for tonight.  He's made the Yankees look very smart (and me very dumb) for choosing him over D.J. Mitchell for the long man role.

The rubber game of the series is tonight, on national TV, with Ivan Nova squaring off against Jerome Williams to try and get his team the series win and get them back over .500.
Posted by Unknown at 9:32 AM No comments: