So as the year winds down and we inevitably get force fed a million different "Best of the 2000s" collections from the various major sports outlets, you can pretty much take it to the bank that the majority of the focus is going to be on the Red Sox and their "dominance" over baseball over the past 10 years.  Most of that Red Sox sack tickling will be coming from the Worldwide Leader, but despite their over-the-top affinity for their Sox, when you really break it down there is no doubt that the New York Yankees were the team of the 2000s.  And it really wasn't even that close.

The easiest measuring stick in sports, of course, is wins.  Nothing defines team success more than winning and in the 2000s the Yankees were the biggest winners.  Over the course of the last 10 regular seasons, the Yankees accumulated 965 wins, 45 more than their closest competitor, Boston.  For the sake of comparison, here's how the top 5 biggest winners of the decade in MLB break down:

2nd through 5th place are separated by less than 30 wins and yet the Yankees hold that 45-win margin over 2nd, a true testament to their consistency and overall dominance through the decade despite the constant influx of new players and personalities, the always glaring lack of starting pitching depth, and the never-ending pressure of playing in New York.

In racking up their 965 wins, the Yankees led their league in wins 5 times over the last 10 years.  Those 965 wins also represent 8 division titles and 9 playoff appearances over that span.  If winning is the ultimate measuring stick of team success, then there is no argument that can be made that the Yankees weren't the most successful team throughout the 2000s year in and year out.

But winning in the regular season means nothing if you can't back it up in the playoffs, and while ESPN would like you to think that the Red Sox torched the Yankees throughout the last decade and were the most successful playoff team because of their 2 World Series titles, that simply isn't true either. 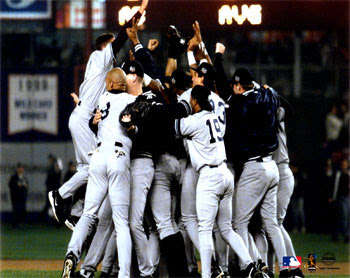 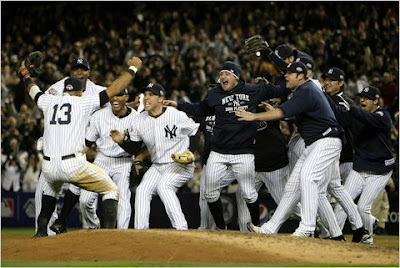 The Yankees won just as many World Series titles as the Red Sox in the past decade, 2, which ties for the most in baseball over that span.  In addition to that, they made 2 more appearances in the Fall Classic in 2001 and 2003.  Now 2003 was a disaster and a perfect example of how important pitching is to winning in the postseason, but 2001 was a fluke win for Arizona and had the Yankees not been playing the infield in, we could erase that loss as one of the few blemishes on Mariano's record and be talking about winning title 29 next year instead of 28.  For the record, Boston has not appeared in any more World Series than the 2 they won.  And just for shits and gigs, the 2009 Yankees were the only team of the 2000s to win 100+ games in the regular season and win the World Series, the truest example over the last 10 years of the "best" team winning the championship.  How do ya like them apples, Tim Kurkjian?

Delving within each team over the past 10 years, you can also find countless All-Star appearances, Gold Gloves, Silver Slugger Awards, MVPs, Cy Youngs, MVP and Cy Young candidates, and league leaders in every statiscal category imaginable, a great representation of the high-quality of players the Yankees have put on the field.  Quite simply, the Yankees have had the biggest collection of talent on their teams over the last decade and that is because every player in baseball recognizes the prestige that comes with wearing the pinstripes and wants to play for the Yankees.

In addition to all their on-field team and individual success, the Yankees used the 2000s to establish themselves as a national and international landmark.  They set MLB attendance records, brought in big-name foreign free agents, and generated billions of dollars in revenue.  This expansion culminated in the creation of the YES Network in 2002, at the time making the Yankees the only sports organization to have their own dedicated TV network.  Today you can travel anywhere in the world and see Yankee hats and t-shirts; my trip to Germany last year is a testament to that as I saw just as many Yankee hats walking through downtown Dortmund as I did hats or shirts of the local Bundesliga soccer team.  The interlocking "NY" logo is one of the most recognizable on the planet and you just don't get to that point without being the best.

The Red Sox were a great organization over the 2000s, don't get me wrong.  But they were the flavor of the week, the trendy team to jump on board with after they finally got off the schnide in 2004 at the expense of the Yankees.  People will point to their ALCS comeback in 2004 as proof that they were better than the Yankees, but over the long haul of the decade, the numbers don't lie: the Yankees were a more consistent, dominant, successful team.  In the last year, the Yankees have re-established themselves as the team to beat in baseball and are positioned perfectly to continue their winning trend into the 2010s while their counterparts (Boston, LA, the Mets, etc.) still have holes to fill and gaps to bridge just to keep up.

Any way you look at it, the Yankees in the 2000s, just like in the 1990s, were the best team in Major League Baseball.  They have firmly entrenched themselves as the premiere organization in baseball as well as in American sports, and have shown that they are already committed to maintaining and enhancing that standing in the 2010s.  Long live the Empire!! 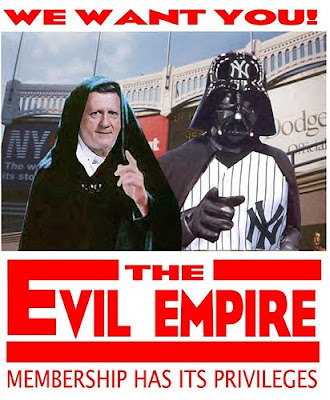