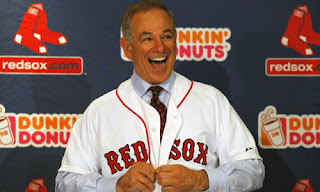 The wait is almost over, friends. We're just a handful of days away from finally being able to talk about real, actual, on-the-field baseball again. Pitchers and catchers are expected to officially report this coming Sunday, but if you're a daily follower of the Yankee blogopshere you already know that players have been trickling into the facility at Tampa since last week. The team appears to be stoked that baseball is starting up again and ready to get back to work, and that makes me even more stoked for Spring Training to get started. Spring Training is almost never boring for the Yankees, and this year should be no exception. There will be plenty to follow and talk about over the next month or so, and here are the major storylines I know I'll be following particularly closely.

It's the only position player topic that has gotten as much attention this offseason as A-Rod's health, and it's really going to be the only thing I care about in regards to Teix in Spring Training. I don't care if he boots every ball hit to him, drops a bunch of throws from the field, or doesn't get a single hit from the right side because I don't expect those things to be issues during the season. But I need to see some improvements in his game from the left side of the plate to feel good. I want to see him taking more pitches, swinging at fewer curveballs, not getting too far under the ball and popping it up, driving the ball the opposite way with power, and if he's going to experiment with bunting, get it out of the way before the games start to count. We all know numbers don't mean a thing in Spring Training, but this might be the single most important Spring Training lefty split slash line in Yankee history.

By my count, this will be the third consecutive Spring Training that Alex Rodriguez will attend coming off of a new offseason workout plan to get him ready for the season. And it will be the first where the change in offseason workout plan wasn't related to performance or production, but rather just staying on the field. The Horse is getting up there in years, that's a fact, but he shouldn't be quite ready for the glue factory yet. I want to see how A-Rod's body responds to getting back into full-scale baseball activities. How's he going to look physically playing a full game in the field, running the bases, et cetera? And more importantly, how is he going to feel the next day? It's true that he's come through the past two Spring Training healthy and still gotten hurt during the regular season, so a clean bill of health at the beginning of April doesn't guarantee anything. But for the first time, A-Rod comes into camp with people almost expecting him to get hurt, which forces me to pay attention.

I'm still a little surprised that the Yankees didn't already have the move to fill the lefty DH role finalized when they made the Pineda and Kuroda moves, mainly because I didn't think they would want to be here, a few days away from camp opening and still trying to swing deals. I'm still intrigued by the idea of them bringing somebody in, but not if it completely kills the chances of Russell Branyan making the team. I think Branyan could be just what the Yankees need out of that role this season and he comes with an incredibly low-risk, low-dollar contract. That being said, I also would have loved to see a deal get worked out for Travis Hafner. Whoever ends up being involved in the competition, this DH spot is the only major positional battle to speak of, so it's going to get its extra share of coverage.

Real talk for a minute? Michael Pineda is a beast. A beast. This is a guy who put together a ROY-worthy season last year; he's not a scrub. And yet he comes into Spring Training this year almost a little underrated now that everybody has had five weeks to nitpick everything wrong about him and probe for every conceivable flaw instead of recognizing that he's a big, hulking kid with a nasty fastball and great command who pitched very well last year. He's something to embrace and build around, not worry about not, and I can't wait to see him get on the mound for the first time as a Yankee. Once again, I say this knowing that Spring Training performances don't mean a whole lot, but I wouldn't mind seeing Pineda get a little buzz going for himself heading into the regular season with a strong ST campaign.