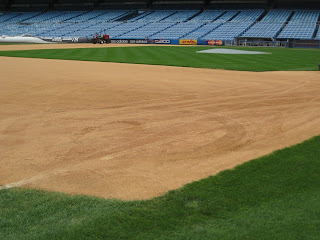 (It ain't quite ready yet, but soon... )﻿
We're less than 2 weeks away from Opening Day, so it's time for AB4AR to get its season preview on.  Over the next 12 days, we'll take a look at every part of the team from every angle, culminating in the official 2011 season preview the week leading up to Yanks-Tigers on March 31st.  For starters, let's ease into the 2011 season by taking a quick look at what we know and don't know about the guys who will man the inner area of the diamond this year.

Martin has certainly shown that he still has the skills to be an elite catcher.  He has hit the ball well this spring, showing some pop in the bat, and he's also flashed some leather behind the plate and ran the bases well.  When he's clicking on all cylinders, Martin is easily one of the 5 best all-around catchers in the game.

What We Don't Know: How long will he stay healthy?

The big issue with Martin over the last few seasons has been how long all his cylinders stay functioning.  The Yanks have eased him into ST to get him to 100% physically, but once the season kicks in and he's catching 5+ days a week, will his body hold up?

What We Know- He put in a lot of offseason hitting work.

So far it seems to be helping, as Teix has swung the bat well in Spring Training.  He's also shown no signs of lingering injury from all the dings he had at the end of 2010.

What We Don't Know- Will that extra work help him get off to a good start?

Teix's offseason swing work was inspired by his historically cold starts to the regular season, a tradition that was incredibly bad in 2010, even by Teix's slow start standards.  Whether the extra work over the winter will help cure this early-spring ailment remains to be seen.

What We Know- He has started to become a leader.

Cano has gone from being benched in '08 because of lack of effort and perceived lack of work ethic to becoming one of the example setters for guys in 2011.  He had Frankie Cervelli and Eduardo Nunez work out with him over the offseason and seems to be setting himself up to assume a leadership role when the Jeters and Posadas of the world decide to hang 'em up.

Projections for 2011 have Cano's numbers down across the board from his 2010 campaign, mainly because they factor in his down year in '08.  But some baseball "experts" also expect Cano's numbers to dip in 2011.  I am not  one of those people and expect Cano to outperform his 2010 numbers, but only time will tell.

What We Know- A-Rod came into camp in great shape.

The Horse looked lean and mean when he arrive in Tampa this year for Spring Training, and so far his offseason workout program has paid dividends.  He looks smooth and comfortable in the field, and his power is back in his bat as he has his swing all but locked in.

What We Don't Know- How that shape will hold up over 162 games.

Is the new and improved A-Rod designed to fight off the aches and pains that have hindered him over the last few seasons and allow him to put up MVP-caliber numbers?  Or is it merely masking the fact that he's an older player who is going to break down physically this year at some point?

What We Know- Jeter has finally committed to altering his swing.

He worked with Dr. Long at the end of the 2010 season and saw some better results.  Before 2011, Jeter worked even more with Long on eliminating his leg kick and speeding up his swing.  While he's still getting used to the new mechanics, he has shown some more pop in his bat in ST.

What We Don't Know- Will the new mechanics help him bounce back?

The new swing is designed to speed up Jeter's bat and allow him to get back to his trademark inside-out swing to right field, but can it help him win the battle over Father Time over the whole season or will pitchers figure out a new way to exploit Jeter's deteriorating bat speed and get him out consistently?
Posted by Unknown at 12:40 PM No comments: