Thoughts On The Cano Contract Situation 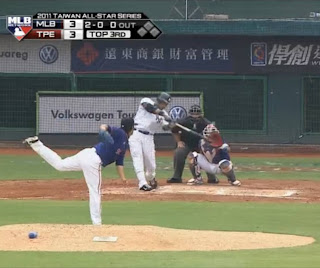 The future of Robinson Cano in pinstripes has become an increasingly popular and important topic of discussion over the past few months, both in terms of what kind of deal he could get and how the Yankees' efforts to re-sign him will impact their goals of getting below the $189 million payroll limit for 2014.  That discussion has become even louder in the last day or so as the Rangers' recent re-signing of Ian Kinsler, combined with similar re-up deals for Brandon Phillips and Dan Uggla, has established a baseline for the numbers.  2 posts yesterday, one from Mike Axisa of RAB and another from Eric Schultz of TYA covered the current situation about as well as I could ever hope to, so rather than try to craft something as well put together as they did, I'll just put my Peter King hat on and offer up some of my own thought on the matter and what I think can, should, and will happen. 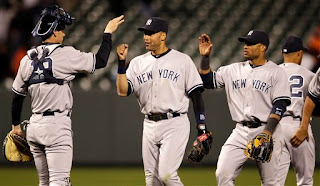 (Love seeing the postgame handshake line.  Courtesy of The AP)﻿

Things didn't look great early, as the Yankee offense looked to once again be overmatched by a pitcher they had never faced before.  But some timely late-inning hitting and a lockdown bullpen performance to pick up Freddy Garcia ended up being enough to get them their 2nd straight win.

- A night after Ivan Nova turned in a sterling starting pitching performance, Freddy was off from the word go in his first start of the season.  Maybe it was the cold weather affecting him, but he had little to no command of his offspeed stuff and became the first pitcher since 1989 to throw 5 wild pitches in a game.  Like Phil Hughes a few days ago, Freddy failed to make it out of the 5th inning.

- Orioles' starter Wei-Yin Chen was solid through 5 innings, holding the Yankees to just 1 run on Derek Jeter's leadoff home run.  But he tired in the 6th inning and the Yankees took advantage, aided by Buck Showalter sticking with Chen a little too long, scoring 3 runs to tie the game.

- As bad as Garcia was, the bullpen was that good and then some.  Phelps, D-Rob, Logan, Wade, Rapada, and Mo combined to throw 7.1 inning of scoreless ball, allowing only baserunners and K'ing 12.  Rapada even got a right-handed hitter out.

- The Yanks had a good chance to get a run in the top of the 11th after a leadoff walk to Russell Martin.  Joe's decision to pinch run for Martin was questionable, as was his decision to have Brett Gardner lay down a sac bunt, but considering the hot-hitting Jeter was on deck and a failed SB attempt by Eduardo would have resulted in bases empty/1 out rather than runner on 2nd/1 out, I can't get too upset at the move.

- After pinch hitting for Andruw Jones in the 8th inning, Raul Ibanez picked up the game-winning hit with a 2-out double in the top of the 12th, his team-leading 6th RBI of the season.

- Gardner: 2-4 with 1 RBI, which came on a smart piece of hitting on Gardner's part to tie the game in the 6th.  Facing a tiring pitcher who was losing his command and just failed to get out of the inning thanks to an error, Gardner was looking first-pitch fastball, got a good one to hit, and didn't waste it.

- David Phelps/Cory Wade: Put up matching 2.1 IP, 0 R, 4 K lines to keep the Yankees in the game and give the offense more chances to score the eventual winning run.

The Yanks will look to get back to .500 and close out this series with a sweep as the 2 aces, CC for New York and Jake Arrieta for Baltimore, square off tonight.