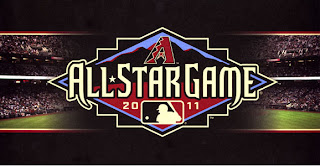 I nailed it with the Cano call last night at the Derby, so I'm going to ride the hot streak and make some predictions for the uninjured, non-exhausted Yankees who are playing tonight.

I don't know if there are any prop bets being laid on this stuff tonight out there on the interweb, but you loyal readers would be wise to print this out and lay a few bucks down if there are.  Don't worry, you can thank me in the morning.  Or use that money to buy the AB4AR t-shirts I've been meaning to design for months now.
Posted by Unknown at 3:50 PM No comments:

Yankees At The Break- Where They Stand 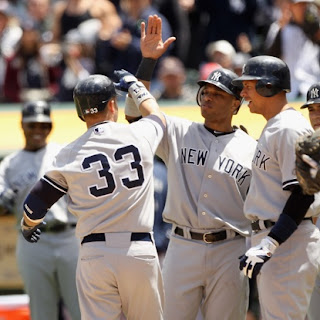 (Photo courtesy of Getty Images)
Yesterday, we looked back at what's already happened leading up to the All Star break, so today we'll focus on where the Yankees currently stand after the last 3+ months.

Currently, the Bombers are 53-35, 1 game behind the Fraud Sawx in the AL East, 0 in the loss column.  They are 30-19 at home, 23-16 on the road, and possess the MLB's best run differential at +121.  They are 5 games clear of both Tampa Bay and Anaheim for the Wild Card right now, with 2 games in hand over Tampa and 4 in hand over Anaheim, which works to their advantage.  They are an astoundingly good 26-5 in day games, a surprisingly sub-par 27-30 in night games, and have played the AL East and Central at a slightly above-.500 clip while feasting on the AL West and the National League.  They have also been better than usual against LHP, racking up an 18-8 record so far.  All in all, the Yankees are in a very good place considering the combination of serious injuries and uneven performances they've experienced so far.

Offensively, it's pretty easy to say that the Yankees are the 2nd best in baseball behind the Fraud Sawx, with a small window to argue that they are #1.  They currently rank 2nd in team OPS (.784), wOBA (.346), wRC+ (116), and WAR (21.6), 3rd in R (455), and 1st in HR (123).  There are 3 legitimate All Stars in the lineup in C-Grand, Cano, and The Horse, with Mark Teixeira putting up All Star-caliber power numbers.  Those guys have carried the load with the likes of Swish, Jorge, and Jeter rebounding from slow starts, Gardner and Russell Martin bringing up the rear in terms of production (while still remaining productive offensive players), and the bench chipping in a little here and there.  Really nothing out of the ordinary for the type of lineup the Yankees roll out on a daily basis.

Pitching is where the team has actually overachieved.  Currently the Yankee staff ranks 9th in MLB in ERA (3.46), 12th in FIP (3.76, which is 4th in the AL), 11th in K/9 (7.03), and 7th in WAR (12.2).  In fairness, a lot of that has to do with the combination of CC, D-Rob, and Mo, but for the most part the rest of the staff has chipped in admirably.  Both Freddy Garcia and Bartolo Colon are pitching well above expectations and, save for Colon's quick DL trip, have stayed healthy.  A.J. has rebounded from his awful 2010 to get back closer to his '09 numbers.  And Ivan Nova, before being sent down to make room for Phil Hughes, has held his own in his first full year as a Major League starter.  Despite all the injuries to the 'pen, the Yanks are getting solid contributions from guys like Luis Ayala, Hector Noesi, and Cory Wade, and Boone Logan looks like he's starting to get out of his funk.

Defensively, the team has really shined this year, Jeter and Cano's range be damned.  They currently rank 4th in baseball in UZR (25.0) and 1st in UZR/150 (7.5), which tells a better story than their middle-of-the-pack FP and E numbers.  All 3 OF are playing above average, Teix and A-Rod are still Gold Glove worthy at the infield corners, and Russell Martin has been an upgrade over Jorge and Frankie Cervelli behind the plate.  When you add up the defensive with the top-of-the-heap offensive and pitching numbers and it's easy to see why the Yankees are one of the best teams in baseball again.

Injuries are the biggest issue for the Yanks right now.  A-Rod had his meniscus surgery yesterday and will be on the shelf for at least a month, and Jeter, Mo, Swish, and Russell Martin are all a bit banged up from the wear and tear of the first half.  On the positive side of the injury report, Phil Hughes is back and in the rotation, his strength and velocity looking much better than they did in April, and Rafael Soriano and Damaso Marte have started throwing again.  Joba is still out for the years, and things don't look promising for Pedro Feliciano or Eric Chavez, but as a whole the team is starting to get healthier than they have been the last few months.  And that's a good thing when you consider how well they've already done.
Posted by Unknown at 12:09 PM No comments: