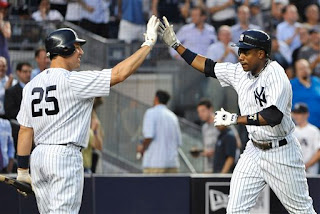 Small sample yes?  Yes.  Drastic improvement?  Not at all.  But with the long stretch of diminishing results leading up to this recent resurgence, I'll take the baby steps as a good sign.  Teix is one of, if not the most important cog in keeping the Yankee offense dangerous during The Horse's absence.  And up until recently he hadn't been living up to that responsibility of his massive contract.  But now all signs are pointing in the right direction and if he can continue this upward trend, and get his production back to the normal Teix levels we expect, it makes the immediate concern for adding a bat at the deadline less of an issue and makes the long-term concern of having the Yankee lineup at full strength and at its most dangerous during the stretch run and postseason much more likely.
Posted by Unknown at 12:26 PM No comments: 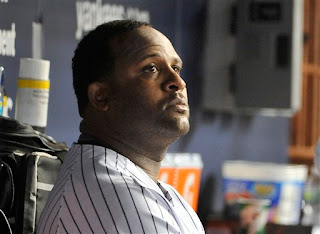 With all due respect to the Justin Verlanders and Jered Weavers of the world, if CC is not the leading Cy Young candidate right now, then something is seriously wrong with people.  He has a better FIP (2.49) than both of them, more wins (MLB-leading 15) than both of them, and a higher WAR (5.6) than both of them.  He's pitched more innings than anybody in baseball except for Verlander, strikes out more guys than Weaver, and does it for a better team that has arguably a weaker staff, making what he does more valuable to his team's success than either of the other 2.  And last night was the perfect example of just how valuable he is.
Posted by Unknown at 8:17 AM No comments: