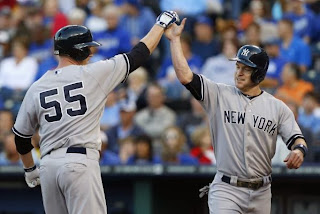 As the start of the offseason draws closer with the World Series set to begin this week, the Yankees draw closer to a potentially franchise-altering few months, one unlike anything we've seen in any of the past 5-10 years.  They've got a ton of money coming off the books, a significant chunk of additional money that could be coming off sometime in the next month or so, the current cornerstone of the franchise who may or may not leave via free agency, almost an entire starting rotation to rebuild, a floundering farm system that could finally be in for some major changes at the top, and as competitive an environment in the AL East as we've seen in years.

What Boras said to The NY Post last week:

"It’s the first time in a lot of years the Yankees have to prove to major free agents they will be competitive next year.  That’s never really been a question in New York, but they have so many spots to fill. It’s a different place."

That may sound like the words of a man who's still butthurt about losing his 2 biggest Yankee clients to other agencies, but there's a lot of truth in Boras' words.  The Yankees weren't really that active in the free agent market last offseason beyond re-signing their own guys and they stood mostly pat at the trade deadline.  The perception they've created around the game in the last year is that they're more concerned with the bottom line than with winning ballgames, and players can and will pick up on that.  They know the Yankees haven't been spending much and they know they have a lot of holes to fill this offseason.  The chance for big money in pinstripes isn't as high as it was just a few years ago.

It would be one thing if free agents thought they could get the most money from New York while playing for a team that may not make the postseason next year.  It's another when even that is no longer a guarantee and the team looks closer to falling into the AL East basement than climbing back to the top of the division.  If they want to maintain the allure they've always had to big time free agents, the Yankees do have to do some work to prove their willingness to compete.