The biggest bit of real news to come out of Cash's press conference yesterday was the announcement that the Yankees would not be picking up Andrew Brackman's 2012 option, and that he would become a free agent.  I'm sure feelings were mixed across the board on this announcement.  I imagine some fans were surprised that the Yanks would basically give up on a recent 1st-round draft pick, and I imagine there are some fans saying "good riddance" to a guy who, quite frankly, didn't even come close to living up to his potential as a 1st-rounder or the money the Yankees paid him.  My personal opinion, it was a move that the Yankees didn't want to make, but probably had to.  Because honestly, there's really nowhere for Brackman to go next season.

The Yankees used him out of the 'pen a few times late this past season, but he didn't do anything to convince them that he's a realistic relief option for 2012.  Why would they take up a spot on the 25-man with Brackman when they already have Mo, D-Rob, Sour Puss, Logan, Wade, possibly Noesi, and at some point Joba?  And because they promoted ManBan and Betances to Triple-A last year, that rotation is now full with those 2, Mitchell, Warren, and Phelps.  Nobody would give Brack a chance to find himself as a starter again at one of those guys' expense.  And if you try to send Brackman further down the system to figure the kinks out, all you're succeeding in doing is taking away valuable experience and innings from younger prospects, guys like Stoneburner, Brett Marshall, Bryan Mitchell, Nik Turley, etc.  At this point, they are the ones that should be trying to hone their stuff and refine their command, not 26-year-old multi-millionaire Andrew Brackman.

It sucks that Brackman's career path has played out this way, but the Yankees can't afford to wait around for this guy anymore.  Dude posted a 5.77 FIP and 7.03 BB/9 in 2011 in Triple-A.  That's not just regressing from his 2010 numbers, that's straight up falling off the cliff.  And with the rest of their stockpile of pitching talent on the way up, there really isn't any room at the table for Brackman, and the Yankees shouldn't feel obligated to make room.  Not for the money they're paying him.  The last thing they need is another Kei Igawa situation.  If he decides he wants to suck it up, accept a MiL deal and try to rebuild himself, then fine.  But if he doesn't, I know I can live without him in the Yankees' future plans.
Posted by Unknown at 12:37 PM 3 comments:

How Salty Should I Be About Brett Gardner Not Winning A Gold Glove? 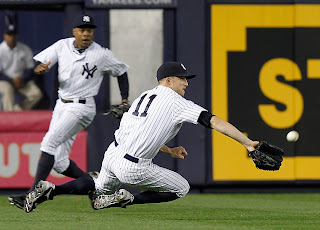 There's how Gardner and Gordon stack up, and I only put that up because I thought it was a foregone conclusion that Gardner was going to win his first Gold Glove last night.  When you look at these 2 guys, though, you can see why Gordon got the victory.  He made more plays and had fewer errors than Gardner in slightly more innings and also dominated with 20 outfield assists.  The slightly higher FP also doesn't hurt.

But Gardner dominates Gordon in the sabermetric defensive breakdown, torching him and pretty much every other AL outfielder in UZR and UZR/150 .  I also found it particularly interesting that Gardner's Revised Zone Rating (RZR) and OOZ (Plays Made Out Of Zone) numbers were much better than Gordon's, .944 RZR/120 OOZ to .923 RZR/74 OOZ respectively.  This is almost certainly due to Gardner's very high RngR (24.5), which was much higher than Gordon's (-2.1).

Basically this award played out in a complete "old school vs. new school" fashion, with Gordon winning the old school side and Gardner the new school.  Gardner covers more ground, gets to more balls, and makes more plays than he should, but Gordon does more with the balls hit right to him and uses his arm strength as a defensive weapon to cover for the extra ground he can't cover.  Gordon also had a much better year at the plate, and to a certain degree the Gold Glove is still looked at with offensive stats taken into consideration as well.  That was likely enough to tip the scales in Gordon's favor, which sucks for Brett and Yankee fans but is understandable.

Maybe if Brett started taking my advice and learned to hit with a little more power, he could drive up his offensive numbers in 2012 and finally win a Double-G.
Posted by Unknown at 7:48 AM No comments: