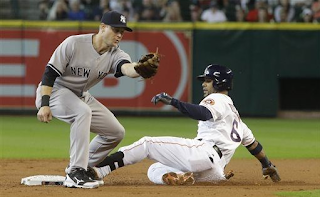 With Mo and Andy's goodbyes out of the way and the playoffs long gone from view, there was nothing left to play for on the season's final day.  Joe managed the game that way, sitting Robinson Cano and Ichiro to give them some needed rest and giving the ball to David Huff to start the game.  If there was anything on the line today, it may have been chances for the young guys like Adams, Zoilo, Murphy, and Betances to make a positive last impression on the coaching staff before spring camp next year.  The game went long and the Yankees came away with a win to finish their 2013 season on a somewhat positive note.

- Huff wasn't quite as effective as he's been as Phil Hughes' caddy in the 1st.  He gave up a double and a single to 2 guys named Jonathan Villar and Matt Dominguez to give Houston the early 1-0 lead.

- As expected, the skeleton lineup didn't produce much against Erik Bedard.  3 hits - a Curtis Granderson double and a pair of singles by Eduardo Nunez and Brendan Ryan - was all they mustered while striking out 7 times in a scoreless first 5 innings.

- To his credit, Huff shook off the tough 1st to pitch 4 straight scoreless frames of his own through 5.  He only gave up 1 single in that span and retired 11 in a row (including 5 strikeouts) with a good 2-seamer/slider combo.

- Bedard left after 7 scoreless and just like yesterday, the Yankee offense finally struck late.  Nunez doubled with 1 out to give the Yanks just their second RISP of the day, and with 2 outs C-Grand came through with a base hit to tie the game at 1.

- When it's the last game of the season, why not have some free baseball?  The game stretched into the thanks to solid relief pitching and poor hitting by both sides.  Biggest Yankee highlight was the combined 2.1 shutout, 4-K innings from Dellin Betances.

- At long last, Mark Reynolds got an "all" at-bat instead of a "nothing" one and homered to lead off the 14th.  After 2 strikeouts, the Yankees rattled off 4 straight hits to bring in 3 more runs and give D-Rob a comfy cushion to close things out.

These last few games of the season have little meaning  in the grand scheme of things, but they've given us a few great moments to remember as we watch the final days of 2/3 of the remaining Core Four.  Mo's exit on Thursday night at The Stadium was as emotional a scene as I can ever remember at The Stadium, maybe the most emotional since President Bush came out to throw that first pitch after 9/11.  Last night, Andy Pettitte made his final start, and although it wasn't at home, there was still a lot of emotion attached and a lot to remember.  With nothing left to hold out for, Joe gave Andy the longest leash of the season and Andy responded by pitching his best game of the season, even better than his last home start last Sunday.

- Andy put at least 1 runner on base in each of the first 4 innings, but worked his way out of trouble most of the time.  He gave up a run in the 4th on a single and a pair of groundouts, but he looked good and he was working quickly.

- The kid-filled Yankee lineup did its typical worst to help Andy early.  They stranded 2 runners in the 2nd, got sat down in order from the 3rd through the 5th, and generally looked weak and pathetic.

- They finally got their act together in the top of the 6th, on the back of a Chris Stewart leadoff single.  Eduardo Nunez and Robinson Cano followed up with singles of their own to score Stewart and chase Houston starter Paul Clemens from the game.  Alfonso Soriano walked to load the bases, and Nunez came around to score on a throwing error to give Andy a 2-1 lead.

- Once he had that lead, Andy buckled down and pitched like the postseason ace we've seen time and time again.  He walked the leadoff batter in the bottom of the 6th and then retired the next 11 batters he faced into the bottom of the 9th.  He gave up a 2-out hit, but Joe was going to let him finish what he started and he did just that by getting a groundball out to end the game, earn the win, and end his career in style.