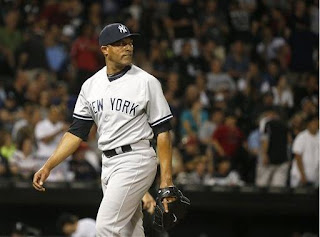 Monday night was supposed to be the night that turned the 2013 Yankee season around.  At least that was the narrative we were expected to believe after Dan Barbarisi posted his story on Monday night's postgame closed-door meeting.  There were words like "fun," "energy," and "intensity," and the obligatory "our postseason starts now" message was thrown out there.  The team didn't want to fall into a pattern of accepting the losing culture that has defined them since about mid-May.  They had to come together, they had to stay positive, and they had to start turning things around towards a playoff push Tuesday night.

The reality is that this team was dead where it stood and has been for some time.  The fact that a team meeting was called to rally the troops and get some positive vibes going served only to confirm that previous sentence.  I can't remember who said it, but I remember hearing a player once sum up team meetings like this perfectly: "Winners win.  Losers meet."  When it's reached the point where everybody in the clubhouse is unspokenly aware that they've become losers and a meeting has to be called to address it, it's already too late.  Hell, an unnamed player in Barbarisi's story practically admitted that when he spoke to him.

That's CC Sabathia's 4-seam fastball plot from his start last night.  It's noteworthy mainly because it shows almost no pattern whatsoever.  He's scattered throughout the strike zone, missing badly both up and down, and still leaving too many pitches in the meaty part of the hitting zone.  The fastball, be it due to velocity or location, has been at the forefront of any analysis of CC since Opening Day and he's been at his best when he's been able to locate it down in the zone.

Strangely enough, last night's ambiguous, inconsistent location plot was actually a step up from what CC's fastball has been doing for him lately.  3 earned runs allowed in 7.1 innings is much better than the atrocious results he put up in his previous 4 starts, and the collection of 4-seamers he threw in those starts looks like this: 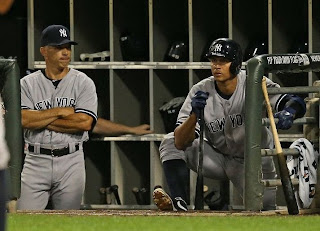 Not to talk like it's an overly arduous task or some kind of back-breaking work, because I fully recognize that it's not, but writing game recaps this season has been absolute torture.  This is such an unentertaining, uninspiring baseball team that it gets my morning off to a bad start more times than not reading about what they did the night before.  Last night was the coup de grace of bad losses this season, the rare game where you're treated to 2 losses in 1 game and the even more rare game where you see Mariano Rivera fail to close out a win.  If the Yankees' season wasn't already over before last night's game, it damn sure is now.

- Alfonso Soriano got things off to a good start with a 2-run HR in the top of the 1st to give New York a quick lead.  They added to that lead with a Vernon Wells ribbie single in the 3rd and an Eduardo Nunez solo homer to lead off the 4th.

- Somewhat surprisingly, CC Sabathia made that lead stand up through 4 innings.  He actually retired the lineup in order the first time through and worked around a single in the 4th with a double play ball.

- The White Sox started to chip away in the 5th on a Gordon Beckham HR, the 25th of the year off CC.  The Yanks left the door open for them by leaving the bases loaded in the 6th and 2 men on in the 7th.

- Chicago struck in the bottom of the 7th, stringing 3 straight hits together and plating 2 runs on a double and a force out to pull within 1.  Those runs put a damper on what was starting to look like a really good turnaroud start for CC.

- It's always a surprise when Mo blows a save.  It's an especially big kick in the dick when it happens with 2 outs and strikeout machine Adam Dunn at the plate.  But Dunn found a hole in the left side on an 0-2 cutter and the game was tied.

- After failing to score with Brett Gardner on third in the 11th, the Yanks regained the lead on a Robinson Cano bomb of a HR to lead off the 12th.  Good to see he's still alive.

- Once again they couldn't hold the lead and once again they couldn't finish an inning with 2 outs.  Adam Warren, in his second inning of work, gave up 2 straight 2-out singles before catching too much of the plate with 1-0 fastball to Alejandro De Aza.  De Aza squared it up for a base-clearing triple and a walk-off win.