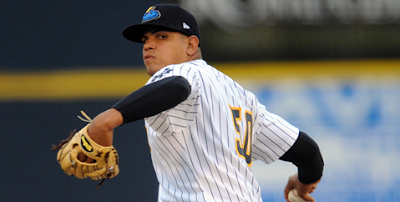 With CC on the DL, Hiroki Kuroda becomes the Yankee rotation's unofficial ace.  And after Friday night's pitching debacle, he took on the ace's responsibility of needing to provide innings and pitch well to avoid a losing streak.  It wasn't going to be an easy task, especially with Jake Peavy as his pitching counterpart, but Kuroda lived up to the responsibility and then some yesterday, blanking the White Sox through 7 of the strongest innings he's pitched this year.

- Kuroda's worst inning was actually the top of the 1st, where he gave up 2 singles and a walk but managed to work out of trouble with a couple of strikeouts.  Those Ks would be a sign of what was to come.

- The offense quickly got on the board in the bottom half of the inning on Curtis Granderson's 23rd HR of the season.  Dewayne Wise doubled home Nick Swisher in the bottom of the 2nd to make it 2-0.

- Kuroda was brilliant after the close call in the 1st.  He retired all 12 batters he faced in the 2nd-5th innings in order, 6 of them via strikeout and all of the strikeouts swinging.  Kuroda really had his slider and splitter working, and the White Sox were practically powerless against them.

- As well as Kuroda was pitching, 2-0 was hardly an insurmountable lead, and Peavy wasn't pitching horribly either.  But he made a couple of mistakes in the 5th to Wise and in the 6th to Robinson Cano and they each hit solo shots to extend the lead to 4-0.

- Kuroda finished his afternoon in style, striking out his 10th and 11th batters of the game to end the 7th, and it was all bullpen from there.  After being spared from Friday night's carnage, D-Rob, Boone Logan, and Rafael Soriano combined for 2 painless, scoreless innings to complete the shutout.

- Major props to Wise in this series, who came up just a triple short of the cycle yesterday after throwing 0.2 perfect innings the night before.