The Horse In Human Form! 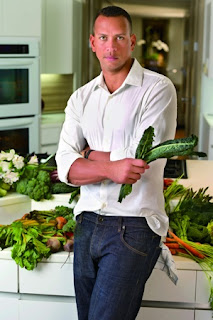 (Photo used courtesy of EJ Camp)
I don't know how I missed this over the weekend, but check it the F out!

It's The Horse!  In his human form!!  Off the baseball field!!!  Such a sight is truly something to behold.  It's like seeing the Hale-Bopp comet while picking up a 4-leaf clover and then having the winning PowerBall numbers in your pocket!  And not only that, but he's holding kale, the MVP of the green vegetables.  I took it in the first round of my vegetable fantasy draft last week.

And now it makes perfect sense why he's off to such a great start this year.  He's upped his veggie intake.  Anybody who knows horses knows they have very finicky digestive systems (I can't prove this).  Now that he's getting his daily value of greens like kale and broccoli and what have you, his system is more regular and he can have a more balanced swing without worrying about any gastrointestinal distress he may cause himself by swinging.  Ahh, the beauties of science.  And the benefits of a well-balanced diet.  All taught to us by the greatest centaur athlete in American sports history.

Is there anything this guy/horse can't do?
Posted by Unknown at 4:32 PM No comments:

Should We Be Concerned About Phil Hughes? 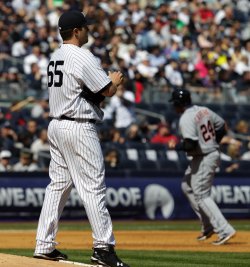 (It's never a good sign when Cabrera is jogging around the bases behind you.  Courtesy of The AP)
I know the title of this post seems ridiculous after just one outing, but when the major concern with Hughes right now is his decreased velocity, something I somehow managed to miss over the entirety of Spring Training, then I think it warrants discussion.

It would be one thing if we were talking about an older pitcher like Garcia or Colon, but this is Phil Hughes.  Phil Hughes is not an old guy, he is not coming off any arm injuries, and by all accounts he came into this season healthy and ready to go.  And yet he has been sitting high 80s-90 on the gun with this fastball all spring, with no immediate signs of improvement.  And yesterday the problem that plagued Hughes last season, his inability to put guys away with 2 strikes, reared its ugly head again, possibly due to his lack of heat on the heater.

And therein lies the key to this whole issue.  Phil Hughes is a pitcher who lives off his fastball.  Sure, you can say that about a lot of pitchers, but as a young guy who is still refining his secondary stuff, Hughes needs his fastball to be on for him to be effective.  When his fastball is popping and hitting corners, Hughes' offspeed stuff becomes more dangerous because he can use the heater to set that stuff up.  Having a good fastball allows him a little more margin for error with his offspeed stuff.  When his fastball is garbage, like it was yesterday, hitters don't have to respect his secondary offerings and can sit on the heater, which they did.

Again, I recognize that this was just one start and it's no cause for the Red Alert flag to go up in Yankeeland.  But it is something that the Yankees and Hughes have to monitor and work to fix.  Hughes is being counted on to be one of the sure things in the rotation this year, a guy they could count on to give them 6-7 quality innings every time out so the bullpen can be saved for Nova and Garcia's outings.  Yesterday, that didn't happen and now the burden falls on Nova to give a good outing today since Colon will not be available in long relief.

I expect Hughes to figure it out, get his velocity back, and be just fine.  But it would be nice if the velocity were already there.
Posted by Unknown at 8:38 AM No comments: