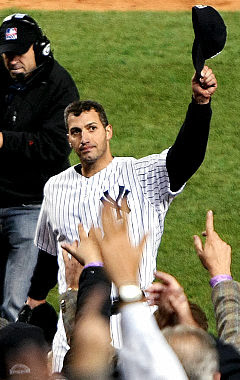 With the Justin Maxwell trade taking place yesterday, I think that pretty much signifies the end of the Yankee offseason in terms of moves that will actually affect the 25-man roster.  That means it's time to take a look back at the moves the Yankees did make and hand out some grades.  For the purposes of this post, I'm including internal re-signings as well.

I wasn't all that concerned about the money in the deal.  Everybody knew that Jeter was going to be a Yankee and everybody knew he was going to get way more than his recent performance warranted because of his pedigree and because of how important he and the Yankees are to each other.  The length of the deal was what bothered me; 3 w/ a player option instead of 2 w/ a team option.  Jeter is already hanging on by a thread defensively and needs to bounce back in 2011 at the plate to make this deal worth it.

In a perfect world, Mo would be signing 1-year deals until he decided he didn't want to pitch anymore, or at least a 1-year deal with a team option for another after 2011.  But then again, Mo has never showed any signs of falling off in terms of his production, and he always manages to stay healthy enough to pitch.  When you factor in his past performance and the fact that he's the GOAT, 15 mil seems fair to me.

The Meat Tray definitely isn't the best pitcher around, but he's better than Dustin Moseley and Chad Gaudin, and with Ace getting hurt again, he was the best option to have around as a long man in the bullpen.  The fact that other pursuits didn't pan out and he's now slated to be the 5th starter is not a good thing, but for the money he's being paid, I can live with having him back.