Real Quick, Before I Forget... 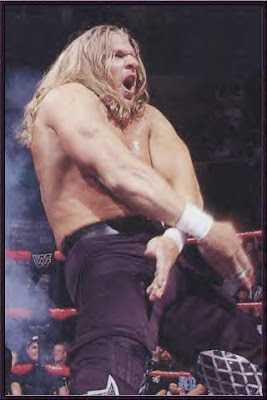 Suck it, Boston!!!  Suck it long and suck it hard, you whiny fairweather bitches.  You can complain all you want about your injuries and how losing tha Yookah and the haht of your team, Pehdroiaaaaah, killed your season, but the fact of the matter is Theo's "defense and pitching" offseason plan didn't work at all, your team sucked, and they got beat by 2 teams that were better than them.

So put away your Varitek jerseys and move on to Tawm Brady and the Pats, because that's all you have left this year.  And don't worry, we'll let you know how the clubhouse Korbel and Bud Light tall cans taste.  They taste like victory. 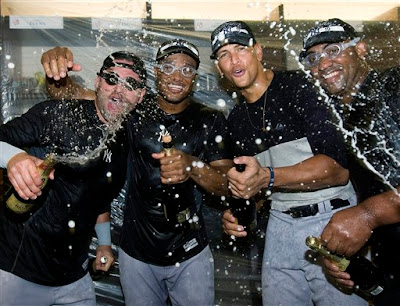 (Photo courtesy of The AP)
P.S.- Enjoy having Josh Beckett's corpse stinking up your rotation as your version of A.J. Burnett for the next couple years.  BAHAHAHAHAHAHAHAHA!!!!!
Posted by Unknown at 2:34 PM No comments:

Alright, so the Yanks are officially in the playoffs, but what's the next move?  Are they playing for the division title or not?

Joe started to show his hand by pitching CC last night and riding him for 8+ innings and then going straight to Mo.  He left no doubt that he was in it to win it last night and the team responded.  But then after the game, the mixed messages started showing up again.  Andy was scheduled to pitch tonight and now he's been scratched and moved back for Javy (WHY???????), and there was talk of resting some of the starters.  But the Yanks have also stated multiple times that their goal is to win the division and when you've got guys like Jeter and A-Rod, who would be amongst the first candidates for some rest, saying they want to stay in and go after the division, what do you do?

Joe and Cash and everybody else need to decide what's important.  They can either play it safe, rest some starters, and juggle the rotation to set up the ALDS, or they can keep the foot on the gas and play it out to try and pass Tampa.  Joe said last night in the locker room that "We still have aspirations of winning our division and trying to get home-field advantage."  Now he needs to decide how strong those aspirations are and how hard he wants to try to win the division.  I would say that starting Javy in place of Andy tonight is not a move made with winning the division in mind and I think everybody would agree with me.