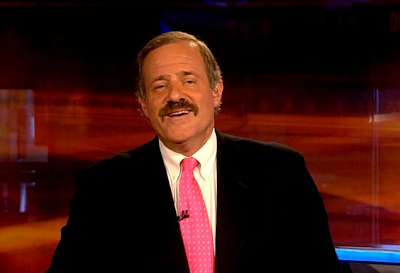 (This guy knows his sports, people)﻿

There was a time when I was entertained by Chris Berman and his schtick.  It was way back in the mid-to-late 90s, when I was still young and stupid, and awaiting the onset of puberty to at least attempt to mature me a little bit.  I took great joy in hearing him say "RUMBLIN'-BUMBLIN'-STUMBLIN'!!!" when calling football highlights or make explosion noises when a Mike Alstott highlight came on.  In a related story, I was a loser kid.

Since early high school, though, I've been keenly aware of a fact that many other intelligent sports fans know to be true; the fact that Chris Berman absolutely sucks.  He's an abomination of a "sports personality;' a bloated, self-important, uninformed caricature of what an ESPN anchor/studio host/announcer is supposed to be, and the perfect visual and auditory representation of what ESPN has horribly mutated into over the past 10 years or so.  So it was an entertainment dick punch to end all entertainment dick punches when the ESPN broadcast for last night's Yanks-Rays game began and I heard Berman's obnoxious voice come through my TV speakers.  I was already planning on tipping a few brewskis back while I watched the game, but as I told my friend, my 12-pack didn't stand a fucking chance when I realized Berman was doing the play-by-play.

While there's nothing informative or entertaining in what Chris Berman says or how he says it as it relates to the sporting event he's blabbing about, his general buffoonery is good for a couple of laughs at his expense.  Knowing this, I gritted my teeth and forced myself to concentrate and listen to what he said last night in the hopes that I could catch some good lines, and I think I came out with a few winners.  Please know that I didn't enjoy doing this.  It was practically torture.  But my dedication to you dear readers knows no bounds.  Without further ado, I present to you, The Worst of Chris Berman from last night's game.

Waiting For "The Kick" To Come From The Horse

Maybe I just didn't pay close enough attention to the big declines in his overall power numbers the past couple reasons.  Maybe I saw what Kobe Bryant's offseason PRP therapy did for him this year and got overly optimistic.  Maybe I'm just too much of a homer.  For whatever reason, I really believed that Alex Rodriguez was going to have a big year this year.  He got healthy in the offseason, he looked good in camp, and Joe made a point early in the season to start getting A-Rod regular rest through either DH days or full days off.  Yet here we are, just days away from the midpoint of the season, and The Horse is having a pretty pedestrian year.  The 13 homers are nice, but his slash line of .266/.357/.436 is down from last year, as is his ISO (.170), his wOBA (.352), and his wRC+ (119).

The assumption going into the season was that a healthy Horse in 2012 would be a more productive Horse, and that just hasn't been the case.  Rodriguez is already well on pace to exceed his games played and plate appearance totals from his injury-plagued 2011 and he's still seeing declining numbers across the board.  There haven't been any reports about there being any physical problems with him, and with 19 games at DH A-Rod should be plenty rested, so what gives? 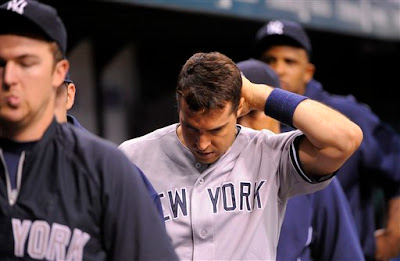 (What's more upsetting?  The missed scoop at 1st or that haircut?  Courtesy of The AP)﻿

I picked Matt Moore as my AL Rookie of The Year winner.  So far this season, he hasn't exactly made me look good for making that pick (4.19/4.46/4.26 split, 4.30 BB/9 in 88.0 IP), but he did shut down the Yankees for 5 innings with 11 Ks in one of his first career starts last season, and as a young, good-sized lefthander with monster stuff, he was the type of pitcher on paper that should dominate the Yankee lineup.  The Yankees' starter last night, Freddy Garcia, is everything that Moore isn't: old, right-handed, and no stuff to speak of, and yet he still managed to outpitch Moore.

- The Yanks got on the board in the top of the 1st on a Derek Jeter leadoff double and Hideki Matsui doing his best Raul Ibanez impression on a high flyball to right off the bat of Mark Teixeira that he lost in the ceiling for an RBI double.  I'm not ashamed to admit that I burst out laughing at Matsui's expense when the ball dropped.

- Alex Rodriguez and Robinson Cano followed up with line drive singles up the middle to make it a 2-0 game, but Nick Swisher conveniently grounded into an inning-ending DP to help Moore wriggle off the hook.

- Freddy worked through the first 3 innings scoreless, and looked pretty good doing it.  He got helped out by a couple of well-placed LD outs to Cano and Teix, but he was he throwing strikes and working efficiently as well.

- Freddy gave up a HR to B.J. Uption in the 4th and I didn't think much of it, but the slider he hung to Carlos Pena with 1 out in the 6th that Pena hit for a HR to tie the game at 2, at 74 pitches, was a clear sign that he was done.  I'm guessing it was a slider, because it barely moved, but 5+ innings of 2-run ball from Freddy?  I would have signed up for that before the game.

- Cody Eppley got the Yankees 1 out into the 7th, and it fell apart from there.  After being ahead of the immortal, intentional walk-worthy Sean Rodriguez 0-2, Boone Logan walked him and then allowed him to advance to 2nd on a wild pitch.

- D-Rob came in after a pop-up for the 2nd out and fell behind Brooks Conrad (also an immortal) 3-1 before grooving a fastball that Conrad hit for an RBI double to tie the game at 3.  A luckily-placed ball down the line from Eliot Johnson that Teix couldn't handle and it was a 4-3 Tampa lead.

- The Horse gave one a ride to the warning track to lead off the 8th, but that was close as the Yankees would come to mounting a comeback against the Rays' bullpen.  Balls.