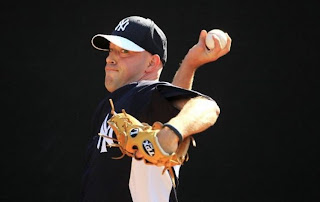 (Used courtesy of The Star-Ledger)

David Aardsma became the biggest roster crunch casualty of the spring yesterday when the Yankees designated him for assignment to clear the final 40-man spot they need to fill out their Opening Day 25-man.  Despite signing him to what was essentially a 2-year deal, and despite a solid ST performance from Aardsma in his first fully healthy season back from TJS (6 H, 2 BB, 3 ER, 7 K in 7.2 IP over 8 appearances), Aardsma "didn't really fit" with the team's bullpen needs according to Joe Girardi.  Aardsma's spot in the bullpen will be given to Shawn Kelley, who apparently impressed Joe more with his ability to throw multiple innings.

I understand that somebody was going to have to take the 40-man fall to make enough space for all the Yankees' recent acquisitions.  It's the nature of being an old, injured, inflexible team.  I also understand that Aardsma, as the 4th right-hander in the pecking order at best and only on a $500k deal, isn't the greatest loss in the world.  I'm just not sure I understand the logic in the decision making.  To say the Yankees "needed" another multi-inning guy in the 'pen this season is a bit of a stretch.  Their rotation isn't a "5 innings and out" type, they've got solid depth to cover the late innings, and they're going to have David Phelps holding down the longman spot when Hughes returns from the DL.

He may not have been a world beater, but I think Aardsma is, was, and would have been a better guy to have for the lower-leverage innings than Kelley.  ST stats being what they are, Aardsma still pitched better than Kelley this spring and he deserved a 40-man spot.  Isn't that why the Yankees signed him to a 2-year deal in the first place?  To have him around for this season?  If anybody deserved to go, it was probably Cody Eppley.  But like Kelley, he can pitch multiple innings as well and that's what Joe wants.

It's a tough break for Aardsma, but he should catch on somewhere else.  I'll just never understand the decision to sacrifice a better player to keep lesser ones on the roster.
Posted by Unknown at 12:42 PM 1 comment: