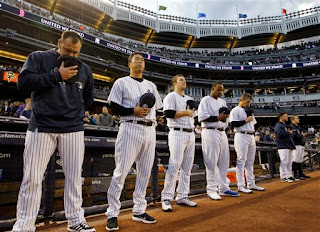 (Get out of there, Joba.  You're ruining the shot.  Courtesy of the AP)

Yesterday we officially kicked off the 2013 AB4AR "Season Review" series with a look back on how the team's plan to contend on a budget worked out.  If you missed the post yesterday and don't have the energy to click the link and catch up, here's a spoiler alert- it didn't.  The same could be said for the team's efforts to address the 2014 rotation.  To have any chance of contending this season, the Yankees were going to need a strong showing from their starting rotation, and they correctly focused most of their offseason efforts on building up that rotation.  But in addressing the needs of the 2013 rotation, they were also creating a bunch of questions about the 2014 version.  The hope was that a lot of those questions would be answered this year, but the end results have left the Yankees with even more issues to address.

This Postseason Is Everything The Yankees Aren't

I've watched a fair amount of the MLB postseason so far, but last night was the first night I really sat down and WATCHED the games for extended periods of time.  With every series in action and the week's fantasy football matchup win already locked up, the timing was perfect.  As I sat watching 3 close, competitive, great games I was struck by a jarring reality; the Yankees really don't deserve to be in the postseason.  OK, maybe it's not that jarring when you remember how bad most of their team numbers were this season, but jarring in a sense that goes beyond the numbers.

It's more than just the numbers, it's the way the teams in the playoffs have built their rosters to contend.  There are bits and pieces everywhere of what the Yankees used to be, what they've gotten away from, and what they've never been.  The collection of teams in the playoffs and the various paths they've taken to get there are a perfect example of just how far off the mark the Yankees are with their business and baseball models.

Last week I said I thought the Yankees should make Curtis Granderson a qualifying offer without even knowing how the market for him was going to shape up.  Based on the latest reports coming out of Chicago, it sounds like that market is coming together already.

A report in the Chicago Sun-Times on Sunday said the White Sox are expected to make "a hard push" for Granderson this offseason.  They need a lot of help on offense too, especially in the outfield, and Granderson has strong ties to the Chicago area where he grew up.  His skillset and local connections would be a great addition to a club that needs to bring some fans back to the park after a disastrous 2013 season.

As far as the Yankees are concerned, this rumor should be a strong indicator that there will be suitors for C-Grand out there and reason enough to make him a qualifying offer.  Even if they don't offer him a big deal, the White Sox would probably go more than 1 year and $14 million to get Granderson and would probably be willing to give up the draft pick to do it.  Odds are the Yankees won't be willing to go more than that, so they can at least recoup the pick for losing C-Grand by making the QO.