Inspired by his recent July struggles, I had plans to dedicate a post today to the recent goings on of Mark Teixeira and try to find out what the deal was with his continued decrease in BA and OBP.  Fortunately for you readers, Matt Imbrogno of TYA beat me to the punch and put together a comprehensive post breaking down Teix's numbers this season, what numbers he usually puts up, and what his numbers would be if his batted ball stats weren't so out of whack.

It's far better than anything I could have put together on my lunch break today, so do yourself a favor and head over to TYA to read the post in its entirety.  A tip of the cap to Matt for jumping on this.  Now let's hope Teix can start turning this around and get some of these balls in play to actually drop in for hits.
Posted by Unknown at 5:54 PM No comments:

Why Is He Still Here? 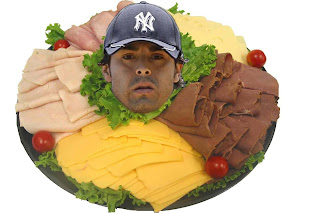 In his 4 appearances since making his gallant return, The Tray has not only not had a clean inning, he hasn't even had one BAD inning.  They have pretty much all qualified as Hurricane Katrina-level disasters (it's been 6 years, I can use that joke.  You don't like it?  Tough).  In 5.1 IP, Mitre has allowed 9 hits, 4 walks, either 7 or 8 ER depending on whether or not you're referencing ESPN's stats or FanGraphs (I'm going with Fangraphs), and just 2 Ks.  That equates out to a 13.50/5.03/6.12 tripleslash and a .5007 K/BB rate, which, by some stroke of black magic, is still not worth negative WAR (thank God for small sample sizes).

I understood the logic in picking up Mitre at the time the Yanks made the deal.  The 'pen was hurting for warm bodies, he was cheap, he's familiar, and when he's on he can generate a lot of ground balls.  But the fact of the matter is, he hasn't been remotely close to on and he's an anchor to an otherwise still solid bullpen.  And the Yankees have Kevin Whelan, George Kontos, Eric Wordekemper, and, once he's fully healthy again, Tim Norton to choose from at Triple-A.  Or they could even go back to the Buddy Carlyle/Lance Pendleton well.  Now none of those options may turn out to be better than The Tray, but they certainly couldn't be much worse.

It really is starting to become inexplicable why the Yankees have such an infatuation with Sergio.  Does he have compromising pictures of Brian Cashman?  Did he walk in on Randy Levine shredding documents?  Is he holding Joe Girardi's family hostage?  At this point, I would not consider any of those possibilities as unlikely, because he sure has shit hasn't done anything on the mound to deserve a roster spot.
Posted by Unknown at 12:40 PM 1 comment: 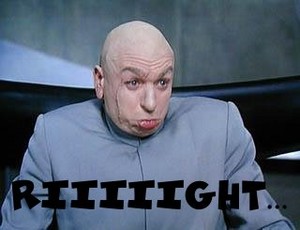 Get bent, Colorado.  Cash may be in the last year of his deal, but he wasn't born yesterday.
Posted by Unknown at 7:33 AM No comments: