What To Do About The Brett Gardner Situation 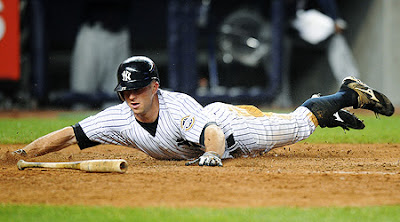 (How do you replace that kind of grit??  Courtesy of The Daily News)﻿

I got an interesting variance in responses after posting the news of Brett Gardner's latest elbow setback on The AB4AR Page last night.  There were calls for the Yankees to get more involved in the trade market (in a big way or small), calls for them to focus on re-signing their own free agents, and my personal thought that they don't really have to do either.  It's not clear what direction they are going to take, but what is clear is that the Yankees are going to react in some way to this latest setback.  They were in "wait and see" mode again, but they've waited and they've seen that Gardner is no longer an option to be counted on.  So what route are Cash and Co. going to take to address this issue?  Let's review the options.

Stabilizing The Pitching Staff With Some CC

All things considered, the Yankees have handled the double-whammy loss of CC Sabathia and Andy Pettitte from their rotation about as well as anybody could have hoped.  The team has gone 9-6 since that fateful day of June 27th, hardly world-beating, but taking into consideration the fact that their AL East lead has expanded to 9 games in that time, that's a damn fine way to get through a 3-week stretch without your 2 best starters.

It hasn't exactly been the smoothest of sailing these past 3 weeks, something that should come as no surprise.  Adam Warren blew up spectacularly in his emergency start in Chicago, so much so that the Yankees demoted him and turned to the still-not-fully-stretched-out-as-a-starter David Phelps to take Warren's spot in the rotation on Independence Day.  Freddy Garcia had been more than adequate in his 3 starts this month, allowing only 6 earned runs, but he hasn't provided a lot of length (17 IP total in 3 starts).  Combine that with a couple of clunkers from Hiroki Kuroda and Ivan Nova and the overall team pitching line over the past 15 CC-less games isn't nearly as sparkly as what we saw from the rotation in early June: 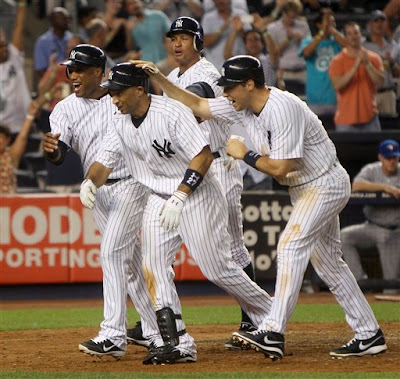 (Everybody happy.  Courtesy of The AP)﻿

With Hiroki Kuroda and Ivan Nova coming up a bit small this last time through the rotation, Phil Hughes is going to continue to be a key piece of this undermanned rotation.  He was hittable in his most recent outing and looking to tighten up the command against a dangerous lineup and Toronto starter Henderson Alvarez.  The Yankees were also playing the first of 15 games they will play against the Blue Jays over the final 74 this season, so start getting familiar.

- Alvarez wasn't fooling the Yankees at all early.  They loaded the bases on him in the 1st, hit a solo HR in the 2nd (Russell Martin), and hit back-to-back doubles in the 3rd (A-Rod & Cano) to take a 2-0 lead.

- Hughes worked the first 3 frames scoreless, and worked around a 2 on/no out situation in the 2nd to do, but he was a little spotty with his command.  He missed with a in the 4th and Adam Lind hit it for a solo HR to make it 2-1.

- I don't know what happened, but Alvarez made the adjustment and pitched the next 3 innings clean.  He retired 7 in a row to start off the run, then got a key inning-ending DP grounder from Raul Ibanez to escape the 6th.

- Hughes gave up an RBI double to Edwin Encarnacion in the 6th to tie the game at 2, but he didn't pitch horribly on the night.  7 innings of 2-run ball should get it done 10 times out of 10.

- Scary moment in the 8th when Jose Bautista hurt himself on a swing.  He looked like he tweaked something in his left wrist on a follow through, and it turns out it .  Sucks for you, brah.

- The Yankees had to get something out of that bases loaded situation in the bottom of the 8th.  They hadn't fully capitalized on all the opportunities they had earlier in the game, and with 2 outs Raul Ibanez made sure they wouldn't blow this one when he hit a game-winning grand slam to right.

- I was a little surprised to see Joe go to Soriano so quickly.  I think Cody Eppley has at least earned the right to try to work out of trouble with how he's pitched recently, but Joe went to Raffy and it was Untuck Time for the win.