2013 Season Review: What We Thought We Knew & What We Learned (The Outfield) 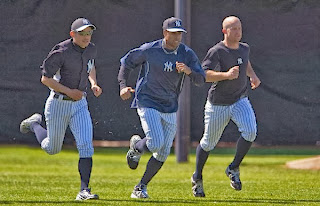 (Never got enough of these 3 together.  Courtesy of Reuters)

After a few years of familiar faces and familiar expectations, the Yankees shook things up in their outfield for 2013.  Gone was Nick Swisher, the plus-offense, passable-defense right fielder from the previous 4 years and gone was Curtis Granderson, who missed a big chunk of time early in the year due to a broken forearm and a bigger chunk later due to a broken finger.  In their places were 2012 trade deadline acquisition Ichiro Suzuki, out to prove his strong SSS performance wasn't a mirage, and Vernon Wells, a former All Star who was past his expiration date and had pretty much been a piece of shit for 3 of the last 4 seasons before the Yanks traded for him in March.

Yeah, it was a new and not so improved group in 2013, one that inspired more concern than confidence when evaluating them before the start of the season.  The lessons we learned from them this season were hard, painful lessons, ones that any intelligent baseball fan didn't really need a refresher course on.  After the jump, re-live some of that pain again. 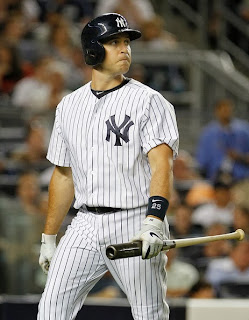 There are headlines aplenty going around the Yankee infield right now.  When you've got $50-60 million worth of players whose statuses for next year are all in some sort of doubt, that'll happen.  The one name that is absent from the conversation is that of Mark Teixeira, and that's probably just fine with him.  Never one to draw a lot of media attention with what he does on or off the field, Teix has slid almost into Kevin Youkilis "don't even both talking about him" territory after having season-ending wrist surgery in early July.  Considering his importance to next year's team, it's probably time to dust him off and get him back in the offseason discussion.

The Arizona Fall League is still in its early days, but there are already some results worth talking about.

- Tyler Austin has gone 4-10 at the plate in 3 games with 1 3B and 3 RBI.  The plan was to get him work at both infield corners this fall, but I've yet to see any reports on what position he's played in the 3 games.

- Mixed bag results for the pitchers as well.  Vidal Nuno struck out 5 in 2.2 IP in his first start, but also gave up 5 hits and 4 runs (2 ER).  Brett Gerritse has also gotten knocked around in his 2 relief appearances (4 ER in 2.2 IP), but the lefty tandem of Fred Lewis and James Pazos has combined for 8 K and 4 BB in 4 scoreless appearances.

Posted by Unknown at 9:11 AM No comments: