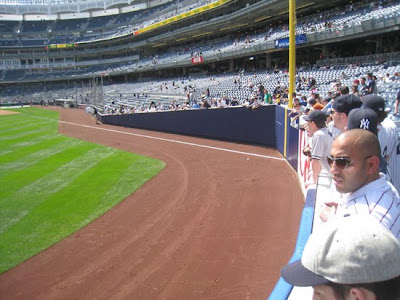 The Yankees are telling agents they only have $2 million, at most, to spend on a left fielder. They figure Damon, even in a diminishing market, never would drop his demands that low.

So unless ownership reverses course on the budget, the Yankees will continue to look at a supplementary player for left field rather than Damon. Specifically, the Yanks would like to find someone to start rather than Brett Gardner or serve as a righty-swinging complement to Gardner.

The player who most entices the Yankees is Xavier Nady, who, like Damon, is represented by Scott Boras. However, Nady is of interest to several teams and, therefore, might be too pricey for the Yankees.

Their next target is Reed Johnson because, of the remaining candidates, he is the one who projects best to being a help defensively while also having a history of hitting lefties well.

The other three free-agent possibilities, at the moment, are Rocco Baldelli, Jerry Hairston Jr. and Marcus Thames. (story courtesy of the NY Post)


Royce Ring, Reid Gorecki, AND David Winfree??? Talk about a fucking haul of talent right there. The hell with a left fielder; the Yankees might as well just play with 2 outfielders because they are stacked with these 3 guys waiting in the wings in the minors.

Seriously, what did Brett Gardner ever do to the Yankees' management and coaching staff that nobody wants to give him a chance in left next year? The kid covers more ground than the Roman Empire, gives the Yankees all kinds of situational, hit-and-run, sac bunt options with him batting #9 and Jeter #1, and showed last year that he can be a more than capable Major League hitter if given the at-bats. He's still a relatively inexperienced hitter at the Major League level and should improve with more work in the cage, more plate appearances, and just by being around guys like Jeter, A-Rod, Jorge, etc.

Instead, the Yanks are entertaining the thought of Xavier Nady; the guy who hasn't played in a year and is going to command far more money than he should rightfully deserve by being a Scott Boras client. It's going to take him at least half a year to shake the rust off, so if you're going to overpay for an older, Scott Boras-guy, why not suck it up and re-sign Damon? I'm not following the logic here.

And as far as the other contingency plans, I would rather go back to the 2-outfielder strategy than have Reed Johnson or Marcus Thames out there. And Rocco Baldelli? Really? Doesn't he have muscular dystrophy or bone marrow cancer or something?

Jerry Hairston, on the other hand, should already be re-signed and it's blowing my mind trying to figure out why he hasn't been already.
Posted by Unknown at 11:59 AM 2 comments: