I Don't Even Know What To Think About This Picture 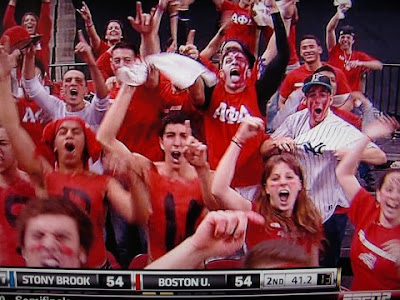 (Photo courtesy of Barstool Boston)﻿
On the one hand, this guy gets a major +1 for wearing a Yankee jersey into Boston and rocking the crap out of it at a major Boston sporting event (can't believe I'm saying that about a BU basketball game).

On the other hand, he's got the BU face paint going, so that's a negative.  And he's wearing a Florida Marlins hat.  What is that about, dude?  Are you subliminally saying you wish the old school, younger A.J. Burnett was pitching for the Yanks?  Are you secretly a Josh Beckett fan?  WHAT THE HELL IS YOUR DEAL?!?!

All in all it balances out to an even 0 on the awesomeness scale.  As much as I'd love to tip my cap to this guy for rocking the pinstripes, the face paint and Marlins hat just don't allow me to do it.  Better luck next time, kid.  Thanks for playing.

(AB4AR is getting into the March Madness spirit.  Not sure if that's a good thing or a bad thing.)
Posted by Unknown at 6:18 PM No comments:

Everybody Loves Them Some ManBan (But Is That A Good Thing?) 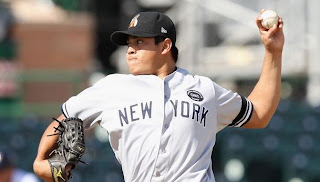 (Wook at dat wittle baby face!)﻿
It's no secret to anybody who follows the Yankees regularly that Manny Banuelos has been impressive so far in ST.  The secret has continued to come out more in the mainstream this week, first when Mo, The Godfather of pitching, had this to say about ManBan:

“I like everything about him. The makeup and how he keeps his composure. I notice situations and how you react in situations. Where you make your pitches in tough situations, where you spot your pitches, he has the ability to do that.”

When Mariano Rivera is commenting on your makeup and your composure, you can be pretty sure you've got a bright future ahead of you.

And then there was this bit from Keith Law's ESPN chat yesterday, when he was asked about ManBan's arrival in the Majors by a reader:

"Midyear? I feel like this is Heyward/Atlanta all over again, where you might let the best interests of the club in the current season trump long-term considerations – and it’s not like Banuelos has a ton of things to work on in the minors. If they gave him a rotation spot now I wouldn’t argue."

Another sterling review from one of the best in his particular field, but there is much more to consider in Law's response.  While it's true that Banuelos, even as young and inexperienced as he is, could be the best option for the 5th spot in the rotation this year, the part about trumping long-term considerations is where I think this possibility ends.  The Yankees have gotten burned big time in the past rushing guys up to the Majors to help the team and then watching their career paths derail and crash and burn (see: Chamberlain, Joba).

Ever since the Jobacle, the Yankees have been very good about keeping their young pitching prospects on a strict plan to build up arm strength and experience in the Minors.  That plan has rewarded the organization by giving them an abundance of legit Major League-potential guys on the cusp of making their debuts.  There is no point in abandoning that plan for one guy now, even somebody as potentially great as Banuelos, when it doesn't guarantee a World Series championship, and when we're talking about one player, even a pitcher, that never guarantees a title in baseball.  The Yankees have built up the rest of their roster around their weak bullpen to make up for that and allow them to not abandon the plan for Manny and the rest of the young guys.  The smart move is to keep on that path.

Now Keith Law is a big ManBan fan, and that's fine.  I'm a card-carrying member of that club as well.  But the Heyward-Braves comparison and saying that Banuelos has nothing to learn in the Minors are 2 unfair statements to make.  First off, comparing a young pitcher to a young outfielder is simply ignorant.  Outfielders play every day, using a completely different set of skills than pitchers.  Starting pitchers focus on  one aspect of the game and employ that aspect once every 4 or 5 days.  It could be true that an OF as talented as Heyward could have nothing left to gain by playing in the Minors, but there is always something a pitcher can work on or refine to prepare himself for the next level.

And even it were true that Banuelos had mastered the art of pitching already in Double-A, there's the innings limitation thing to remember.  It would be one thing if ManBan had thrown 140-150 innings last year in the Minors, but the reality is that those numbers are going to be what his ceiling is this year.  If a team can't let a guy lose and be confident that he can handle a full workload in the Majors, then it makes more sense to keep in the Minors, where he can work on his skills, build up his arm strength, and not have that innings limit be a hindrance to his team's success.

Is Manny Banuelos a big-time prospect?  Hell yes he is.  Are people starting to open their eyes to just how good he is?  It certainly appears so.  But that doesn't mean it's time to get crazy about where he should pitch this year, regardless of the situation at the back end of the Yankee rotation.  The Yankees are handling ManBan the right way and should not change their plans at all.
Posted by Unknown at 11:41 AM No comments: