In Appreciation Of The Back Of The Rotation 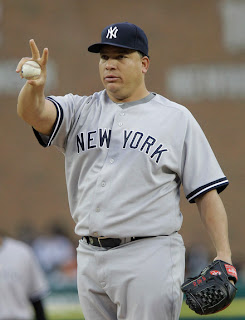 (I bet none of you thought I would even start this many games this season.  Courtesy of The AP)

At the start of the season, the prevailing thought was that the Yankee rotation was going to be CC Sabathia, A.J. Burnett, and Phil Hughes as the sure things and then a rotating series of older veterans and unproven youngsters who would be expected to bridge the gap to the trade deadline when the Yanks could then try to trade for a Chris Carpenter or something close.  That alone was a frightening potential scenario when you consider that calling A.J. a "sure thing" is about as safe as calling Charlie Sheen "mentally stable."

After Hughes stumbled out of the gate and then had to be turned into glue in the form of his DL stint because of a dead arm, the panic meter should have risen to somewhere around 9.7-9.8, but instead the Yankee rotation has been better than anybody anticipated so far, and we all have Bartolo Colon, Freddy Garcia, and Ivan Nova to thank for that.  Don't get me wrong, I'm not trying to take any of the credit away from CC or A.J., as they have more than lived up to their end of the bargain.  But without these other 3 solidifying the back end and then some, this team would not be sitting at 17-9 right now.

In their 11 combined starts after Colon's beauty last night, this is the combined line for Colon, Garcia, and Nova:

That's not just good 'back of the rotation' production.  That would be considered above average MIDDLE of the rotation production.  And when you consider that these numbers are all slightly inflated because of Nova's rough earlier outings that equate to 43 H+BB and 15 ER in 27.1 IP as a starter, it makes everything that much more impressive.  Colon and Garcia, the 2 guys who nobody except Joe believed in, have allowed just 30 hits and 9 ER combined over their 38.2 IP in 6 starts.  That's not acceptable "replacement level" production from your 4th or 5th starter, that's ALL-STAR LEVEL production from any starter.

And the best part about all these numbers is that they don't only demonstrate how good these guys have been, they demonstrate how consistent they've been.  Of their 11 combined starts, 8 of them can be classified as Quality Starts by the standard definition (6+ IP, 3- ER Allowed).  And within those 8 quality outings, 5 of them can be classified as what I would call "High Quality Starts" (6+ IP, 2- ER Allowed).  Save for Nova's 2 early stinkers, these 3 have given the Yankees a damn good outing practically every time they've taken the hill.  Colon has been downright DOMINANT in his 3 starts.  I think you'd be hard pressed to find anybody in Yankeeland who foresaw this high-quality output from this trio, but you also wouldn't find anybody who wouldn't have been thrilled to Michael Jackson zombie levels if somebody told them this is what they'd get.

Is it going to continue for the foreseeable future?  Who knows.  Is it sustainable over the next 136 games?  Almost certainly not.  But that doesn't matter.  What matters is that the Yankees are getting a huge bang for the minimal bucks that Cash spent on these guys in a time when they need it most.  We all scoffed at the decision and now Cash is the one laughing at everyone who doubted the decisions.  If one or more of this trio starts to falter or gets hurt, hopefully by then Phil Hughes will be back to full strength and back in the rotation to pick up the slack.  But for now, we should just sit back and enjoy the ride because it wasn't supposed to be this smooth.
Posted by Unknown at 12:34 PM No comments:

The Horse Gets Spooked 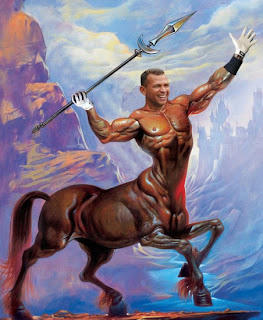 After starting the regular season spitting the same hot fire he was in ST, The Horse seems to have thrown a shoe over the last 2 weeks.  Before he missed his 2 games in mid-April because of the sore oblique, he was sitting at a God-like .385/.500/.821 tripleslash.  Since returning he's seen those numbers drop to a mere mortal .269/.379/.551 and we all know that centaurs of his athletic caliber don't just experience that kind of drop off for no reason, so what, exactly, is going on with him?

Friend of the blog Larry Koestler touched on the subject yesterday with his post on A-Rod's rough week at TYA and came to the conclusion that it was A-Rod's free swinging that was too blame.

"... during the past few days A-Rod chased quite a few more pitches out of the zone, and made less contact with those pitches than he had been. He also swung more often in general, taking cuts at more than half the pitches he saw, but made contact at a distinctly poorer rate (66.7%, down from his season average of 78.4%).

You don't need to be a genius to look at that chart and realize that The Horse has lost some of his patience and reverted to a more Cano-like approach at the plate, and the results just haven't been working for him.  So we know the cause of the dip in numbers, but what is the cause for the increased swing rate.  The way I see it, it can be only one of 3 things:

1) A-Rod is trying to adjust to the pitchers pitching him differently after his scalding hot start.

2) A-Rod is still feeling some lingering effects of the oblique tweak and his swing mechanics are off.

3) A-Rod has become a bit more antsy at the plate since returning from injury because he has been following the news about Uncle Mo getting ready for the Kentucky Derby.

Now scenarios 1 and 2 make a lot more baseball sense, but I wouldn't rule out scenario 3 as being the true root cause.  Back in early March, The Horse had to be the odds-on favorite to win the Derby, but with Uncle Mo coming back into the picture and taking back some of the action,it's not unreasonable to think that that news had a negative effect on him.  I mean, A-Rod is good, but Uncle Mo is enough to stir even the greatest of centaurs.

In any case, I don't think this is anything to worry about.  A-Rod has had some issues before and he always works them out with Dr. Long.  A little video session here, some extra BP there, and he should be right back to his usual self.

(Chart via TYA and FanGraphs)
Posted by Unknown at 8:37 AM No comments: