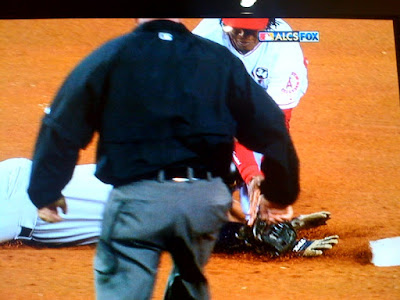 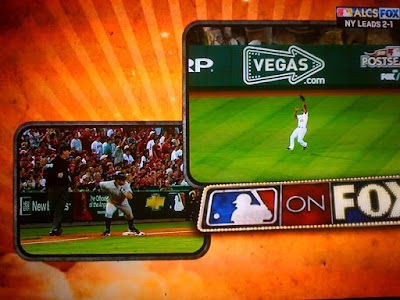 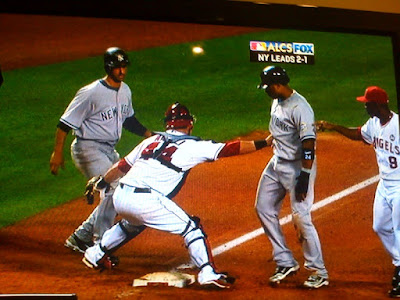 Posted by Unknown at 6:31 PM No comments: 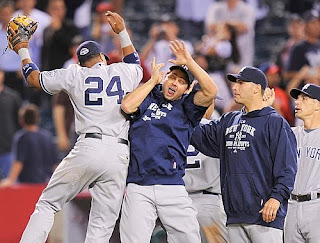 * Strange to see the Yankees running early last night with both Jeter and A-Rod running on first movement in consecutive innings to start the game. They ran themselves out of a potential big inning in the first and even though it didn't affect the outcome of the game, it will interesting to see if they keep up the aggressive baserunning against Lackey in Game 5.

* Before finally breaking out, the top of the 2nd looked like a typical wasted inning by the Yankee bats: 2 on, no outs, and no runs score as Posada, Cano, and Swisher put bad swings on good pitches to hit.

* All the talk of past playoff failures, not being clutch, getting divorced, hanging out with strippers, Madonna, taking steroids, and Kate Hudson has overshadowed A-Rod since he first put on the pinstripes, but last night was a reminder to the world just how great an all-around baseball player he is.

In the top of the 2nd, he walks to lead off the inning and steals second easily before being stranded. In the 4th, he has a great at-bat that ends in a sharp single up the middle then scores the first Yankee run on nothing more than hustle as he bolted from home on contact on Cano's chopper. More than that, he communicated his intentions to Jorge before the play which put Jorge in motion on contact and allowed him to end up at 3rd. Then you add in the home run, the good plays at 3rd base and it becomes a 5-tool night for a guy who has had his identity as a 5-tool player almost forgotten.

* 2 actual text messages I received from my uncle during Nick Swisher's second at-bat:

When you're pre-pitch ritual of looking up to the sky to honor your dead grandparents who raise you is starting to piss off your fans, you know you're struggling pretty bat at the plate.

* Kazmir flat out sucked last night. He had no stuff and wasn't aggressive at all against the Yankee lineup. His slider was beyond awful and the game slowed to an almost complete stop in the 2nd and 3rd as he kept stepping off the mound and having multiple visits to the mound from his catcher. We can officially retire the "Scott Kazmir owns the Yankees" theory because right now he doesn't even own his pitches.

* A major contributing factor to Kazmir's suckiness was a vintage exhibition in Yankee patience by the lineup last night. They got ahead in the count early and then fouled off pitches constantly, which drove his pitch count up to 100 in just 4+ innings. If you can't get strike 1 across and can't get swings and misses against this lineup, then you don't have a snowball's chance of making it past the 5th inning.

* The top of the 4th was just one more example of how baseball needs instant replay for every call. It's sad that so many obvious calls get missed, and even more sad that umpires take it upon themselves to issue make up calls to cover for their partners' mistakes (see: Nick Swisher getting called out for leaving 3rd base early). I'll cover this subplot of the game/series in greater detail in a separate post tonight.

* I wish there was a way to measure what percentage of Yankee fans were screaming "WHAT THE FUCK ARE YOU DOING??!!!!" at their TVs last night when Robinson Cano and Jorge Posada performed their Marx Brothers routine at 3rd in the top of the 5th last night. It's moments like that that still have to make Yankee fans wary of Cano and just how much attention he's actually paying when he's on the field.

* Another example of how lame Cali fans are: fireworks after the Kendry Morales solo home run in the bottom of the 5th. Really, guys? Fireworks for a solo home run that still had your team down 4 runs with less than half the game to play? It's a meaningless run, not the 4th of July, and if you need cheap stunts like that to get your fans to stand up and cheer then you shouldn't be in the playoffs. That's like trying to use a cute little animal to inspire crowd noise. Oh, wait...

* I know it's a downright filthy pitch, but isn't Tim McCarver referring to CC's change as a "power changeup" an oxymoron?

* The bottom of the 7th was the kind of killer instinct moment that Yankee starting pitching has lacked for the better part of 4 years. CC sensed if he could get out of that inning without allowing any more runs then the game was over and he ratcheted the intensity up a notch by striking out 2 in what was his best inning of the night, showing velocity and command that was just as fast and sharp as it was in the first inning of Game 1.

* And right after that slitting of the Angels' collective throats, Johnny Damon follows up in the top of the 8th with what equates to having your dick cut off and stuck in your mouth, post-mortem with the 2-run homer. Glad to see the Damonic one waking up in this series and realizing he needs to show something to get a new contract next year after stumbling to the finish line in the regular season.

* Hey, a Chad Gaudin sighting!!! And he looked pretty damn good in the 9th after having not pitched in a game situation for who knows how long. There were rumors after the game that the Angels offered the Yanks Ervin Santana and a minor league prospect for Gaudin to boost their bullpen depth for Game 5.

* Funny how you always see Tim Kurkjian on SportsCenter before the game talking about how Jon Lester, John Lackey, Scott Kazmir, Vida Blue, Rick James, and Chef Gordon Ramsay all own the Yankees but after the game on Baseball Tonight, he's nowhere to be found to give the Yankees credit for their destruction of these pitchers and the Triple-A lineup of Chris Singleton and John Kruk has to pick up the slack.

* Exactly as I predicted, the offense finally broke out last night, CC shut the door on the Angels and the Yankees got the beatdown game they needed to kill any hope the Angels had of making this a series.

Melky and Damon each looked good at the plate, Teix and Cano had better swings than they had in the first 3 games and looked to be seeing the ball better. Sure Matsui and Swisher look lost, but that's why we could see Brett Gardner in the lineup for Game 5 and Swish on the pine.

When CC pitches like he has his last 2 outings, nobody is going to beat the Yankees. Much like A-Rod, he has shed his "can't get it done in the playoffs" label and is pitching so well right now that he might want to think about re-negotiating his deal and try to get 170 million out of the Yankees.


Game 5 is tomorrow night, but don't let anybody at FOX or ESPN fool you, this series is fucking over. Now where's Jeter's ass? 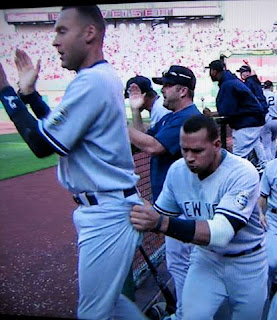