An Audition Of Sorts For Warren Tonight

Yesterday's doubleheader threw a little hiccup into the Yankees' current rotation order.  To combat that and give the older Andy Pettitte and Hiroki Kuroda enough rest between starts, Adam Warren will start tonight's game.  The rookie has worked exclusively out of the bullpen this season and has been on the wrong side of the performance curve since June, yet that did not dissuade the Yankees from keeping him on the active roster and available to make this spot start.

There won't be too much weight put into 1 spot start, especially when it's coming almost a month after Warren's last appearance in which he threw more than 60 pitches.  But Warren can start to lay down the groundwork for his 2014 rotation competition with a good outing tonight.  His only other career Major League start is last year's 2.1-inning disaster in Chicago, a memory I'm sure Warren would like to erase and get himself a fresh start as a starting pitching prospect.  There's plenty of opportunity for him to earn a spot at the back of the rotation next spring, and this is his best chance to get a head start on the competition.

Timing Is Perfect For Another Robbie Cano Tear 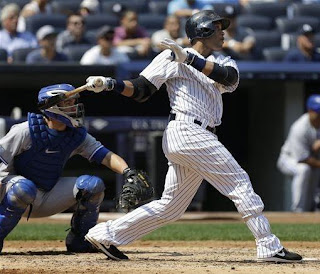 It was a great day at the ballpark for Robinson Cano yesterday.  He had 6 hits and 5 RBI in the 2 games, the biggest overall offensive contributor to the team's doubleheader sweep.  The strong 2-game showing continued a very strong 10-game stretch for Cano that has contributed to August being his best offensive month to date (.397/.481/.559 in 79 PA).  Robbie has 21 hits in his last 10 games (5 for extra bases), 7 R scored, 8 RBI, and more walks than strikeouts (4 to 3).  He's raised his season batting line back up to .308/.390/.510 and has dragged the Yankees back into the tail end of the playoff race in the process.  All signs point to another big Robbie hot streak on the horizon, and the stage is set perfectly for him to finish his season and head into free agency on a high note.

Still No Timetable For Jeter's Return

It's been another slow path back from the DL for Derek Jeter, who finally got into his first simulated game action yesterday.  He had been taking BP and fielding grounders, but hadn't yet run the bases after resuming baseball activities over a week ago.  That's always the big hurdle when coming back from leg injuries, and with as many as Jeter has had this year it's more important that he be able to do that than anything else.

Even reaching that step yesterday and coming through with no reported injuries, there's still no official schedule in place for Jeter's return from the DL.  He was eligible to come off on Sunday, when he still hadn't run the bases, and Joe wouldn't even commit to a plan for today for Jeter.  Now that Eduardo Nunez has returned to the lineup from his tight hammy, the depth situation at short is less dire than it was.  That gives the Yankees the luxury of taking it extra slow with Jeter, and even if it's a "too little too late" situation for this season, maybe it's the start of them just scrapping things and working towards getting Jeter ready for next season.  That would be the smart move.

It would be nice to see The Captain back on the field this season, and at some point he probably will be.  It would also suck to watch him break down after only a few games again.  Working him back super slow now that he's running again is the best path to take.

Posted by Unknown at 9:40 AM No comments: A comeback win in the day and a comeback win at night, with the added bonus of it being a walk-off.  Great day all around in Yankeeland yesterday as the playoff odds improve ever so slightly again.  And what's this??  A decent start from Phil Hughes?  At home???  Now it was a really good day.

- Rajai Davis created a scoring chance for Toronto in the top of the 1st with a leadoff single, stolen base, and moved to third on a groundout.  A Hughes wild pitch and he was running home to give the Jays the early lead.

- The Bombers tied it up against Mark Buehrle in the bottom of the 3rd on a Robinson Cano RBI single.  He was white hot in the day game and it carried over into the night.  Props to Austin Romine for singling to start the rally.

- Hughes was in and out of trouble for most of the night.  His offspeed command was shaky at best and he once again struggled to finish 2-strike and 2-out at-bats.  A 1-out triple and a sac fly in the top of the 5th gave the lead back to the Jays.

- In fairness, Hughes was much better than he's been for the majority of the season.  He pitched into the 7th inning, allowed only the 2 runs, and struck out 6 batters before handing it over to Preston Claiborne and the rest of the 'pen.

- Hughes pitched well enough to win, but wasn't eligible to pick it up when the Yanks tied the game on a Jayson Nix solo HR and put the go-ahead run at second with an Austin Romine double.  Couldn't drive the run in though, and the game stayed tied into the bottom of the 9th.

- Mark Reynolds did what he does when he's not striking out or hitting home runs and led off the 9th with a walk.  Joe sent in Ichiro to run, and he moved to third base on a sac bunt and a steal.  Nix came up again and drove Ichiro home for the walk-off win.  Talk about a picture perfect half-inning.  Just the way Joe drew it up.