We covered the knowns and unknowns around the horn in the infield yesterday.  Today we venture beyond the infield dirt to see what questions and answers are looming in the outfield grass.

What We Know- This Group Can Play Some Defense

Part of what makes the trio of Gardner, C-Grand, and Swish so valuable. and arguably the best OF group in baseball, is the fact that they are all 2-way players.  Nobody is out there hidden in a corner outfield spot because they're an embarrassment with the glove but the Yanks need their bat in the lineup.  Brett Gardner can flat out cover ground out in left field, and makes plays that other left fielders would have no chance to make look easy, something that is not the easiest thing in the world to do in left field at Yankee Stadium.  Nick Swisher, while not being as fleet-footed as Gardner, gets good jumps on balls, takes smart angles, and can flash the cannon to hold a runner or throw a guy out.  And Curtis, defensive metrics be damned, can make some spectacular plays thanks to his speed.  All three of these guys contribute in their own ways at the plate, and then go out in the field and supplement their offensive value by playing good defense and preventing runs.

What We Don't Know- Just How Good Curtis Granderson Is Defensively

Advanced defensive statistics are still nowhere near as accurate as offensive ones, and if you try to use them to judge Curtis Granderson you'll see a perfect example of that.  In his first 2 full seasons in Detroit he posted UZR/150 values of 13.6 and 14.5, both of which are pretty damn good.  He followed that up with 2 consecutive years of negative UZR/150 values, then was back to positive with a 7.9 in his first year with the Yankees.  Last year, though, C-Grand put up his second worst number to date, -5.3, which begs the question of just how good is he out there in center?  He doesn't always get the greatest jump on the ball, sometimes his routes are a little circuitous, and his arm isn't top notch, but when I think back to plays like the one he made in Game 4 of last year's ALDS I'm reminded of how good he can be. 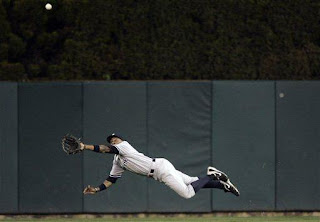 Phil Hughes And The Perils Of Pitching Well During A Surplus

While the majority of the ST pitching storylines have been dedicated either to Michael Pineda's velocity ("ZOMG!!! He's only throwing 93!!!111!1!1) or Andy Pettitte's return (ZOMG!!!! Andy's back!!!!11!1!!1), the starting pitcher with the most to prove this season has been putting together the best spring out of all the rotation candidates. Most people were justifiably indifferent to the stories of Phil Hughes rededicating himself to conditioning this offseason after his disastrous 2011 and wanted to see how that would translate into his performance on the mound before declaring him "back" or even on his way to being back this spring. Hughes' performance thus far in camp, albeit in small sample sizes and against various levels of watered down competition, has been very encouraging and should earn him a spot in the rotation to open the season. But could it also end up working against him?

The devastating fastball-curveball combo that Hughes used to build his reputation as a top prospect has always been hit or miss during his time as a Yankee. Last season they were nowhere to be found thanks to his poor preparation for the season and resulting shoulder fatigue. This spring, Hughes has brought his two main offerings back from the dead and has been showcasing them in the way we always expected to see them. His fastball velocity has been consistently in the 90-93 MPH range since his first outing on March 6th, with some 94s here and there, and his curveball has been swing-and-miss good, something I don't remember seeing since the early parts of 2010. Hughes has also made significant strides in the development of his changeup, something that we've been waiting to see for a few years now, and he looks much more comfortable using it regularly with the rest of his offerings. He's attacking hitters, throwing strikes, mixing his pitches well, and doing a much better job of putting guys away with 2 strikes.

It would seem like all of this should add up to Hughes not only locking himself into the 5th starter spot to open the season, but also guarantee him that spot moving forward if he can continue to pitch this well. Despite his seemingly long tenure with the organization, Hughes is still younger than me at 25 and still seemingly with his peak years ahead of him. He's on the books for just $3.2 million this year, will be arbitration-eligible again next year before becoming eligible for free agency in 2014, and even with a solid season in 2012 he still stands to be a very cost-effective option for the Yankees as part of future rotations. He's a valuable pitcher to have as is and even more valuable if he can pitch well.

Given the bevy of starting pitching depth possessed by the Yankees, however, Hughes' success this spring could actually serve to accelerate his departure from the Yankee organization via trade. Freddy Garcia is the first name that comes to mind when talking about potential trades to ease the rotation logjam, especially after a report of the Yankees offering him to Miami surfaced this weekend, but don't discount Hughes as an option. The same things that make him attractive as a rotation piece for the Yankees also makes him a far more attractive trade chip than Garcia, and the better he pitches the more attractive he becomes to other teams that need pitching. The Yankees can get far more in return for Hughes than they can for Garcia, possibly a young position player that can help the goal of trimming payroll for 2014 (like Philly's Domonic Brown), and not be at risk of negatively impacting their rotation because of the remaining depth.

Keeping the payroll goals in mind, even if Hughes isn't traded this year, he could still force himself onto the trade block by pitching well through this season and next season and pricing himself out of the Yankees' range after 2013. A big 27-year-old right hander with plenty of experience coming off of 2 consecutive good seasons will command much more than the $3.2 mil Hughes is making now. With the cheap internal options in Triple-A expected to be ready and contributing by then, the Yankees could decide that Hughes is too rich for their blood. Not wanting to end up like the Mets with Jose Reyes this past offseason, they could decide to strike while the iron is hot and get something valuable in return for Hughes while they still have the chance. By the same token, given Hughes' uneven track record in the Majors, his trade value could be crushed by another poor season or another demotion to the bullpen. The Yankees have to know that the line between high trade value and very little trade value is razor thin with Hughes. Better to move him when he's on the good side of the line rather than the bad.

Admittedly it's a bit early to be talking about any trade scenario involving Yankee pitchers. Too much depth is a better problem to have than too little, and the smart move would be to carry all 7 guys until Andy is ready to come back and rejoin the rotation. But the possibility of Hughes being moved is one worth monitoring as the season progresses, especially considering that Buster Olney reported during the Yanks-Sawx game last Thursday that the Yankees were "listening to offers" from other teams for Hughes. His value to the Yankees is maximized by either being in the rotation or as trade bait, so moving him to the bullpen to accommodate Andy would be a waste. Hughes' strong spring is doing a lot to get him back in the good graces of the organization and the fans right now, and should get him a spot in the rotation to open the season. If he continues to pitch well, though, he could end up pitching himself right out of town.