Andruw Jones Not On ALDS Roster

Jones himself confirmed it this afternoon to the media:

There it is, folks.  Andruw Jones will not be on the ALDS roster, logic and statistics scores a win, and my faith in humanity has been restored.  Round of applause to you on this one, Joe.

Posted by Unknown at 5:35 PM No comments: 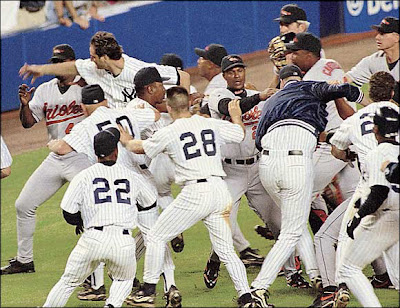 These teams have a lot of similarities, and there aren't many points of comparison where one has the clear advantage over the other.  The Yankees are the deeper and more talented team on paper, but the O's have played with that undefinable "it factor" all year long, and that is reflected in their undeniably impressive 1-run game and extra-inning records.  I expect this to be a close series and a competitive series, and after the jump are the 3 things that are going to decide who wins.
Read more »
Posted by Unknown at 1:00 PM No comments:

Joe's getting his Jim Gordon on and playing things close to the vest with announcements about his postseason roster, so not much has been confirmed yet.  We know that Casey McGehee won't be a part of the club, which is a bit of information that should elicit almost no emotional response, good or bad.  We know that CC Sabathia is getting the ball tonight to start Game 1 of the series, which has been a scientific fact since the moment he walked off the mound in his last regular season start.  We know about 22-23 of the guys whose names will inevitably be chosen, it's not that hard to figure out, so we're really only waiting for Joe to confirm those last 2 or 3 names.  But AB4AR waits for no one!  I'm going to help Joe get the news out of the way early with the official AB4AR 25-man postseason roster final selection.
Read more »
Posted by Unknown at 9:49 AM No comments: