The Horse is back, ladies and gentlemen!  And in his familiar cleanup spot in the lineup.

Also, via LoHud, Aaron Laffey was optioned to SWB to make room for A-Rod, so it looks like Hector Noesi will continue to waste away in the bullpen getting used once every week instead of sent back down to stretch back out as a starter.  But today, who cares?  The fucking Horse is back, baby!!  Hit the music! 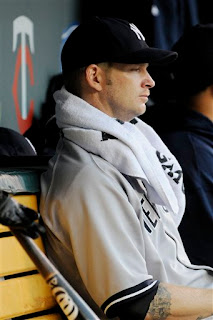 Basically, it's fucking bullshit that I even had to write about any of this.  A.J. is the worst starting pitcher on the team, and it's fucking bullshit that he isn't being treated as such.  The guy has done nothing to earn the confidence and support that his manager has shown him, and nothing to earn another start in this rotation unless somebody gets hurt.  Give me Ivan Nova, give me Freddy Garcia, give me Phil Hughes.  And if that doesn't work, then give me David Phelps, give me D.J. Mitchell, or give me Manny Banuelos.  At least then we know we'll get an honest effort and there will be a legitimate excuse for them not pitching well, and not this constant stream of fucking bullshit we get from A.J. Burnett.
Posted by Unknown at 9:32 AM 2 comments: