Looks Who's Back On Top

Granted it's a tie for first place, but first place is still first place and it's never a bad thing when the Yankees are there.  Bare minimum, it gives me a reason to put the Magic Number countdown back up on the homepage, and maximum it gives the other teams in the AL East reason to be shook.  The Yankees lost their #2 starter before the season started, have played the majority of the season without their 2 best relief pitchers, haven't gotten the production they expected from any of the major run-producing spots in their lineup, still can't hit consistently with runners in scoring position to save themselves, and yet they find themselves on top.

In short, this team hasn't even come close to hitting its stride yet.  It's maybe a 7 out of 10 right now, and that's still good enough to be leading the best division in baseball.  Be afraid, American League.  Be very afraid. 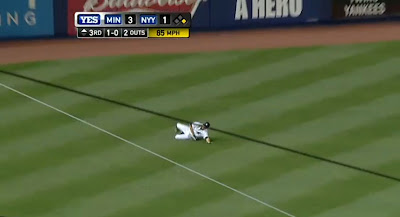 (Maybe just catch it on a hop next time, guy.  Courtesy of MLB.com)﻿

It's not quite as nerve-wracking as the Michael Pineda or Mariano Rivera injury follow-ups, but after suffering yet another setback with his elbow after playing in a Low-A rehab game this weekend, the call has finally been made for Brett Gardner to go see Dr. Andrews today for another evaluation/opinion on the elbow.

By my count, this is at least the 2nd, possibly the 3rd setback that Gardner has had since the initial injury diagnosis and DL trip.  Far be it for me and my marketing degree to question people in the medical field, but I can't help but feel like something was missed here. Gardner has been out since the middle of May, and with Joe's recent comments stating that he doesn't expect to have Gardner back until after the All-Star break, you're looking 3 months on the shelf.  With as much rest as he's had, a simple elbow strain doesn't seem like something that should have this many lingering effects for this long.

It's still too early to jump to the worst-case scenario conclusions, and the Yankees have more than made due without Gardner since he went down, but talks about looking for a replacement could heat up if the diagnosis comes back bad.  I know I still get nervous every time I see Raul Ibanez's name penciled into the LF spot on the lineup card, and not just because he's a poor defender.  Dude is 40 years old.  The more he's out there running around, the more he's at risk of injuring himself too.
Posted by Unknown at 10:43 AM No comments: 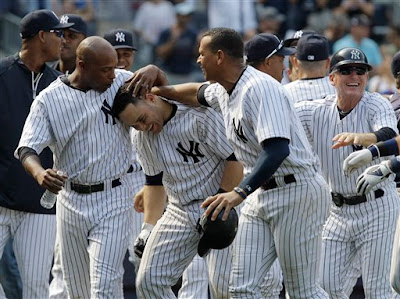 (Russell the Muscle.  Courtesy of The AP)﻿

A little lefty-on-lefty action to finish out the Subway Series.  Andy Pettite vs. Jonathon Niese.  The Yankees loaded up their lineup with the usual "vs. lefty" suspects to try to get to Niese, while the Mets took a different approach and loaded up on no-name bums like Mike Nickeas and Jordany Valdespin in their lineup.  There was also a guy named Vinny Rottino in there, who I assume was somebody they found out in the parking lot selling bootleg t-shirts before the game.  An added bonus, for me at least, was that the game was televised on TBS, so the Game Notes are a little longer than usual.

- Andy needed just 7 pitches to work through the 1st, but got gave up a cheap RBI single to Vinny Rottino in the 2nd to give the Mets the early 1-0 lead.

- That should've been just a blip on the radar, but a combination of poor command by Andy, questionable calls by the home plate ump, a botched potential DP ball by Cano, and some downright lucky BIP placement by the Mets' hitters turned it into a 3-0 lead before Andy K'd Bay and Wright to end the inning.

- The offense looked like they were in business after A-Rod walked and Cano singled to start the bottom of the 2nd, but Nick Swisher inexplicably squared to bunt on the first pitch from Niese and bunted it right back to him to force A-Rod out at third.  Naturally, Niese finished off the inning with 2 Ks.

- Andy settled down after the 2nd and held the Mets scoreless through 6.  His fastball command wasn't there, so he threw a lot more curves and sliders, but he was still effective.  He even got a couple of pickoff outs and made a slick bare-handed play to get an out in the 6th.

- The offense, however, was just putrid.  They put the leadoff runner on in the 3rd, 4th, and 6th innings, and managed to plate nothing.  Jon Niese pitched well, but the lineup didn't do anything with the pitches he did give them to hit, grounding into 2 DPs.

- After Swish grounded into another DP to erase another leadoff baserunner in the 7th, Russell Martin capitalized on a David Wright error with a 2-run Yankee Stadium Right Field Special HR to make it 3-2.  The ball literally could not have been hit any shorter for a HR, but they all look the same in the box score, right?

- The offense did nothing most of the day, and did almost nothing in the 8th when they took the lead.  Jeter's grounder should have been scored an error, C-Grand blooped a single to left, Teix hit a weak grounder through the middle, and A-Rod popped one up to spot in right where nobody could get to it and it was 4-3 Yanks.

- After all of that, of course Rafael Soriano was going to come in and blow the save.  Throwing fastball after fastball over the middle of plate usually leads to that.  Throw some blame Curtis' way too for a terrible read on Lucas Duda's leadoff double.

- It didn't take long for Soriano to get picked up.  Martin, obviously trying to prove that he can hit a real HR, hit a high, deep shot to left on a 3-2 fastball from Jon Rauch for the Yankees' first walk-off HR win of the season.  What a game.