... it means he's taking Freddy's spot in the rotation and starting tomorrow night's game.  Any other reason would be completely stupid and unacceptable.  Phelps is finally stretched back out as a starter, struck out 8 in his most recent Major League appearance, and has been lights out in his last 2 MiL starts (0 R, 18 K in 13.1 IP).  To take a young prospect on that kind of a roll, who has already been shuttled back and forth between starter and reliever multiple times already this season, and swap him for the last man in your current Major League bullpen would be beyond idiotic.

I don't care if it's to showcase him to other teams as a possible trade piece or not.  Phelps is a better pitcher than Garcia and it's already a not-so-big secret that his starting schedule is matched up with Freddy's anyway.  And Freddy wasn't exactly sharp in his last outing.  Anything the Yankees get from him is gravy, and he's shown the ability to be effective as a reliever, so better to move him back to a less-important role now and possibly improve your rotation in the process.
Posted by Unknown at 7:18 PM No comments: 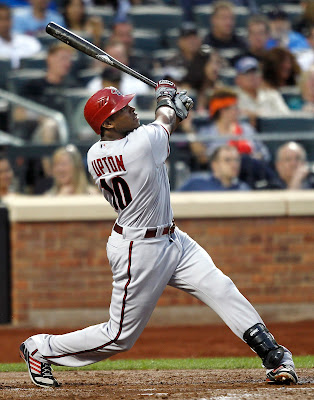 The Yankees have been and continue to be without one of their starting outfielders.  The Diamondbacks are rumored to be interested in trading a young, talented outfielder.  The trade deadline is less than 2 weeks away.  It doesn't take a Mensa International-qualifying IQ score to connect these dots.  When somebody like Justin Upton is supposedly on the trade block, of course the Yankees are going to be involved in the rumors.  There hasn't been a ton of discussion about just how heavily involved the Yankees are in the Upton market right now, but my expectation is that the discussion will only intensify once the latest diagnosis on Brett Gardner is revealed and the deadline draws closer.

Regardless of what happens with Gardner, I don't think the Yankees are in a situation where they NEED to make a move, especially one that will incur as much lost-prospect cost as Upton.  But it's not every day that a player of Upton's caliber ends up being available, so what I'm struggling to answer for myself is whether or not the Yankees SHOULD go after Upton if Arizona is serious about moving him and he's serious about being willing to accept a trade to New York (one of his no-trade clause teams).  There's a lot of factors in play here, so allow me to work them all for myself to see if I can come to a conclusion. 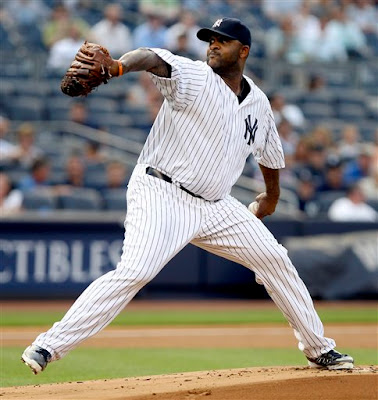 (It was all about this guy last night.  Courtesy of The AP)﻿

I said the time off was going to be good for more than just his groin strain, and CC Sabathia proved me right, at least for last night.  He looked about as good as we could have hoped for in his first start back last night; he was sharp with his command, he had good life on his fastball, and he was efficient with his pitches, throwing 87 to get through 6+ scoreless innings.  The offense gave him a little run support early and then shut the door on any comebacks attempts with some insurance late.  Bing, bang, boom, Yankees win again.

- It wasn't the 1st inning, but I suppose the 2nd was acceptable for the Yankees to score their first runs of the game.  Robinson Cano led off with a single, Nick Swisher walked, and Andruw Jones brought everybody home with his 12th HR of the year.

- Sabathia worked around a couple of Toronto doubles in the 2nd and 3rd innings, and looked just as good out of the stretch as he did out of the full windup.  His slider was really working as a swing-and-miss pitch early.

- Much like they did on Monday against Henderson Alvarez, the Yankee offense went a bit dormant against Brett Cecil in the middle innings.  They left 2 on base in the 4th inning and the last 8 hitters Cecil faced went down in order to keep the game close through 6.

- CC gave up a leadoff single to start the 7th and that was it for him.  After the game, he mentioned 85 pitches being the planned limit, which I can totally get on board with for a first game back.  Cody Eppley and Boone Logan teamed up to finish the inning.

- In the bottom half, the offense finally put the game away.  Heart of the order, Jayson Nix and Chris Stewart, got things started with a single and a double to score 1 run, Derek Jeter followed up with an RBI knock of his own, and A-Rod scored Jeter with a groundout for all the insurance New York would need.

- Chad Qualls gave up a cheapy in the 8th, and for some reason Joe went to Soriano again to clean up the mess in the 9th (5th appearance in the last 6 games), but it was still a no-doubt win for the Yanks.